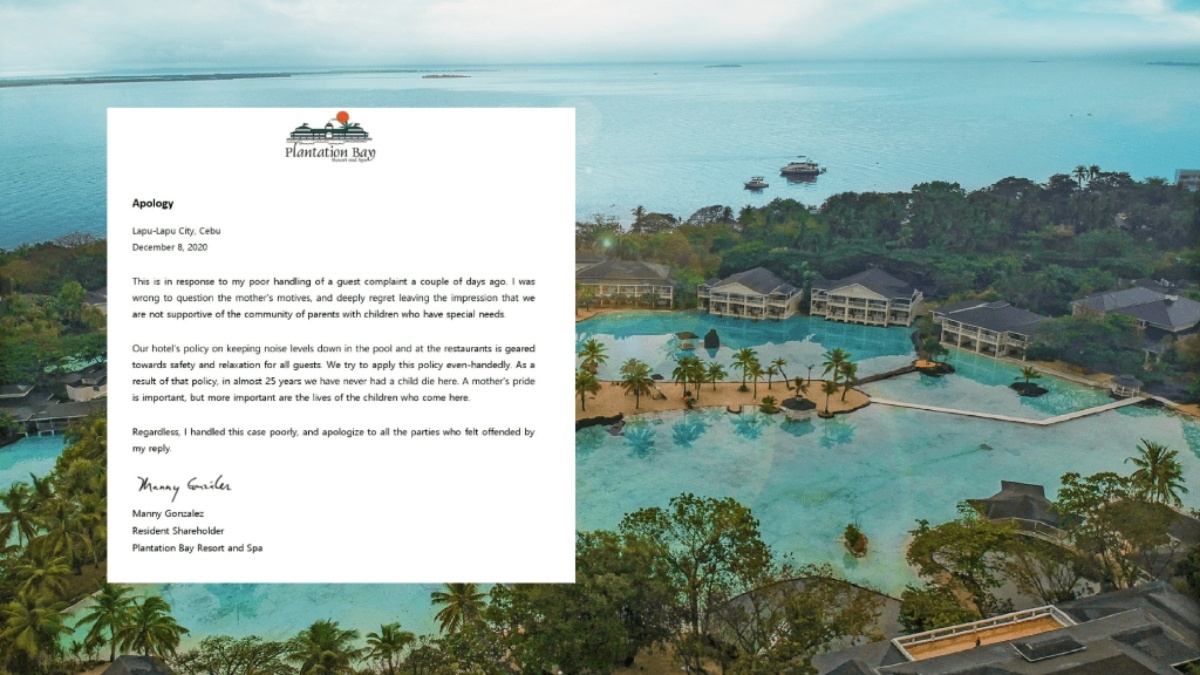 Oh, how quickly things can get messy on social media. Though all of us have been witnesses to the wildest exposes online, we also know that all it takes is a genuine apology and a couple of days before the issue’s kicked to the curb.

The keyword there is “genuine,” and yes, we’re looking at you, the people behind Plantation Bay Resort and Spa.

It was only two days ago when a certain Dee Demmel on Facebook shared a TripAdvisor review revealing the unacceptable treatment by Plantation Bay Resort and Spa in Mactan, Cebu, towards one of their guests. According to one maipages on TripAdvisor, they were chided by the lifeguards in the resort because their child with special needs was being too noisy within common areas.

“It’s a discriminating experience. We often get this a lot. When normal people who are ignorant of people with special needs, give us that stare of ‘please control your child’,” the user shared.

Instead of an apology or a recompense of some sort, they got the following as a response, and honestly, we don’t know where to start.

First, this Manny Gonzalez, a Resident Shareholder of the resort, had the gall to laysplain autism to the mother of an autistic child. (That’s when you argue with an expert over a topic you know nothing about that you had to Google it.)

And then, he brought up the “fact” that every other hotel on the island has had an incident where a child died — yes, DIED — due to being unruly. Way to throw the entire industry under the bus. What do you even hire your lifeguards for?

Lastly, he had the gall to blame the mother for bringing her child along knowing she wouldn’t be able to calm him down at all times. Yes, how dare she goes on a family vacation with her child to a hotel that prides itself on being the best! For 25 years, the hotel has been one of the most accommodating establishments in all of Mactan, until a child with special needs comes in, then they stop being that.

Oh, and he also reminded the mom that talking and opening one’s mouth often is one of the most potent ways to spread COVID-19. To be fair, that’s true, except they’re staying in a resort… which is supposed to have strict health protocols… which is supposed to keep even the slightest symptomatic guests out.

But the clownery doesn’t stop there. After the story went viral online, even making it on national television, the management, care of this Gonzalez guy again, penned another apology, though can we really call it that?:

It’s definitely shorter, but it isn’t at all sweeter. At the very least, there’s a lesson to be learned here: how NOT to write an apology after monumentally screwing up, not once, but thrice.

Tip #1: If you’re genuinely apologizing, don’t say sorry for how the other person reacted to what you did (e.g. “I’m sorry if you felt…”). Just say sorry for, well, what you did. If you’re saying sorry because you “regret leaving a bad impression” or because people “felt offended,” then you aren’t really sorry.

Tip #2: You’re atoning for a mistake, so don’t try to push the envelope by circling back to what got you into trouble in the first place (e.g. “I’m sorry but…”). If you’re saying sorry but you still feel your ableist “hotel policy on keeping noise levels down” is in the right, then you aren’t really sorry.

Tip #3: Please, don’t try to set up a strawman when saying sorry. The mom just wanted to be treated fairly, and you fire back by implying she’s irresponsible and wouldn’t mind if her kid dies. Does it really have to be between decency and death? If you have to gaslight someone, you aren’t really sorry.

Tip #4: Don’t forget to end your apology with a plan you’re willing to commit to so as to keep the incident from happening again. Notice we really didn’t get that from this “apology.” If you don’t plan to rectify your mistake, you’re just sorry you got caught, which means you aren’t really sorry.

Mr. Gonzalez, the solution could not be any simpler: don’t be a douchebag to kids with special needs. Or to anyone, really. Let’s hope they pick up this value sometime in their next “25 years” (if they make it that long).