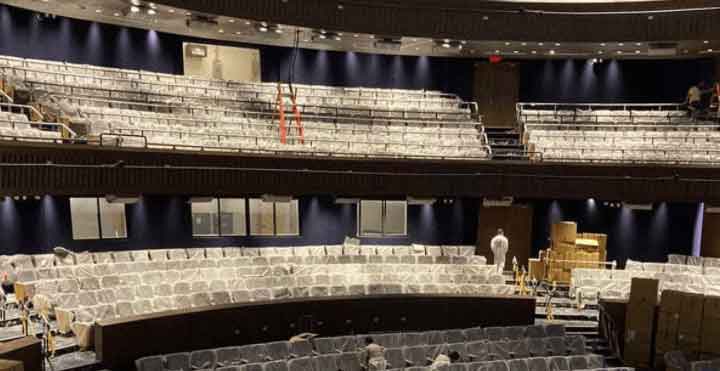 The COVID-19 pandemic has affected the entertainment industry in so many ways, halting filming movies and TV production as well as events that would gather large crowds, such as concerts and theater productions.

In turn, various concert and performing arts venues such as the Mall of Asia Arena and the Araneta Coliseum got converted into mega vaccination facilities for the meantime.

But hope springs eternal for those working in the entertainment industry as the Philippines rebuilds itself slowly with more and more theater shows getting staged, such as the upcoming “LapuLapu Datu Ng Mactan” at the Manila Metropolitan Theater and concerts mounted left and right.

Although most of these are virtual at the moment, it appears it’s only a matter of time before theaters and arenas open their doors to the public. We definitely need to keep our eyes on that!

Despite the challenges brought about by the pandemic over the past year, South Korean tech giant Samsung pushed through with its plans to complete the construction of a world-class facility located in Circuit Makati.

Although it has yet to announce when it will officially be open to the public, the Samsung Performing Arts Theater aims to host cultural events, musicals, concerts, and auditoriums in the near future.

The Samsung Performing Arts Theater boasts international design standards that would rival the 300-seater Power Mac Center Spotlight that can also be found in Circuit Makati.

US-based consultants, theatre projects consultants, and experts on sound design, Akustiks, in partnership with GF & Partners Architects and world-renowned architects from Callison RTKL worked together for the architectural marvel that offers modern elegance and style.

Unlike the Samsung Hall in SM Aura in Taguig that can only accommodate 1,000 persons per event, the newest performing arts venue from Samsung is much bigger and can accommodate up to 1,520 individuals.

We can’t wait to witness local and international performances in the venue. But until the government becomes successful with its COVID-19 vaccination of at least 70 million Filipinos to achieve herd immunity, we’ll keep appreciating it from afar. Well, at least for now.