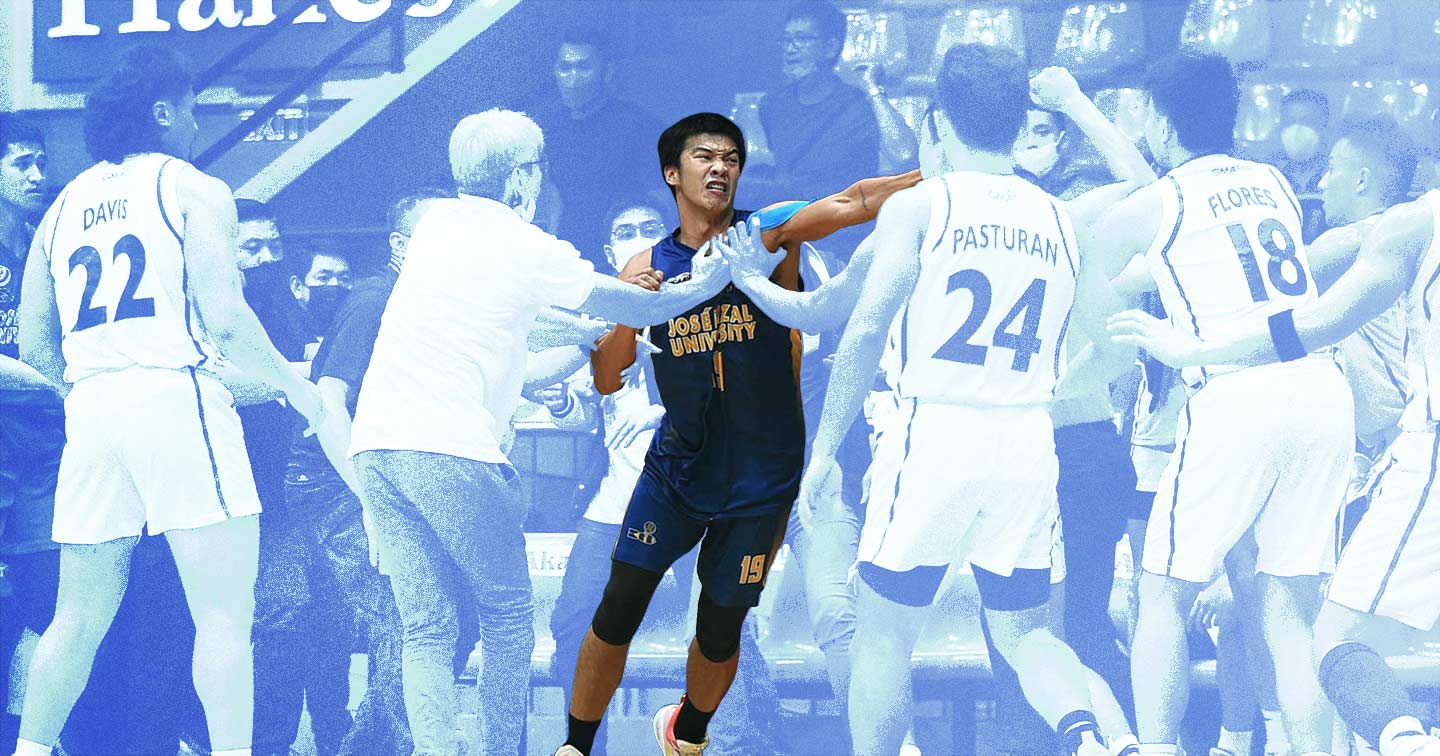 The NCAA Season 98 Men’s Basketball game between the College of St. Benilde (CSB) Blazers and Jose Rizal University (JRU) Heavy Bombers ended earlier than expected on Tuesday. This was due to an ugly incident that broke out in the fourth quarter, sparked by JRU’s John Amores.

With 4:12 left in the game and the Blazers up 68-51, Amores and CSB’s Mark Sangco were jockeying for position when the former clocked the latter with his forearm. A brawl broke out after CSB’s Migs Oczon made a three-point shot. In the ensuing rebound play, Amores and CSB’s CJ Flores got entangled on the floor.

After the game, CSB’s head coach Charles Tiu told the media what happened.

“Amores got entangled with Chris Flores, but nothing was called until he kicked Flores. That’s when the referee stepped in, and they were ready to call a technical foul,” recalled Tiu. “After that incident, a fan behind the CSB bench heckled Amores. That’s when he snapped and came charging at us.”

Sangco tried to stop him with a punch, but Amores continued on his rampage. He struck Blazers Jimboy Pasturan and Taine Davis in the eye and jaw, respectively. Amores was subsequently ejected from the playing court. After reviewing the incident, NCAA officials ended the game. The Blazers won by default.

Sanctions against those involved in the brawl have not yet been made public by the NCAA. None of the JRU players commented on the incident after the game.

John Amores has a history of violence

This is not the first time Amores figured in something like this. Earlier this year, he hit Mark Gil Belmonte of the University of the Philippines (UP) Fighting Maroons. This happened when the Heavy Bombers faced the Maroons in the PG Flex Linoleum-UCBL Preseason Tournament. Amores punched Belmonte in the face, and Belmonte sustained gum fractures and mouth lacerations. Some of his teeth were also dislocated, and he underwent surgery.

UP filed a complaint and criminal case against Amores after the incident. In a Facebook post on Tuesday, NowheretogobutUP Foundation president Renan Dalisay said the incident could’ve been avoided if JRU had addressed Amores’ behavior.

The Blazers’ parents are considering pressing charges against Amores, who has been suspended from the NCAA.

Eleven JRU players and three CSB players were suspended for up to two games.