Join these online activities and celebrate the vibrant colors of Pride.

What was originally called Gay Pride eventually led on to become LGBTQ+ Pride or simply known as Pride. It is a commemoration of the Stonewall riots, that happened on June 28, 1969, when police officers raided the Stonewall Inn bar in Greenwich Village, New York. In a normal circumstance, Pride involves a series of events that happen within June (which is called the Pride Month). To top everything off, a parade is usually the finale showcasing colorful marchers and protesters from the LGBTQ+ community and their allies.

Due to the harsh reality of the coronavirus pandemic and social distancing as the new normal, mass gatherings such as the Metro Manila Pride March will not happen this year as announced. However, it doesn’t mean that Pride will not be celebrated. All around the world, digital celebrations are being organized to continue the vibrant colors of Pride.

Here are some ways on how you can join the protest and continue celebrating the Pride Month here in the Philippines:

Metro Manila Pride events
Metro Manila Pride, the organization behind the Philippines’ biggest annual gathering of the LGBTQ+ community, has come up with several ongoing online events to keep the protest and celebration going. This year’s theme is “Sulong! ‘Wag Patinag!”, which encourages people to continue to fight for equal rights even during the pandemic.

One of their ongoing events happens every Thursday: “How-to Huwebes,” a series of learning sessions and community gatherings on Metro Manila Pride’s Instagram account via Live and IGTV. Through this, you get to meet and connect with top leaders of their niche from the LGBTQ+ community. You can also learn about their craft and success.

The UP Center for Women and Gender Studies (UP CWGS) is the UP System’s Center that addresses concerns and issues involving women and the LGBT in the university and society. This year, they have curated several online events spread throughout June as part of their celebration entitled “Pantay-Pantay, Sabay-Sabay.”

Check out the schedule below:

June 24: On Being Queer (Talk with Director Samantha Lee and Photographer BJ Pascual), 8 pm to 10 pm

The event is free and open to anyone, you can register at tinyurl.com/upcwgspride2020

#LetsTalkOnBluedPH via the Blued app
Last June 10, Blued, the leading gay social app in the Philippines, held a PR launch via Zoom. They introduced a series of events that will empower gay men and trans-women throughout the year with talks from influential leaders of the gay community called #LetsTalkOnBluedPH.

Kicking off the series are guest advocates and activists, renowned Photographer BJ Pascual (June 18), and Creative Director + Fashion Stylist Vince Uy (June 25). June’s topic will be about Fighting Social Injustice. Both personalities will have their evening to share their perspective and opinions about the topic.

Apart from promoting their talk series that will be held on the app, Blued is encouraging everyone to remember the grand-gay-parents from the Home of the Golden Gays (HGG), the AIDS Society of the Philippines (ASP), and The Society of Transsexual Women of the Philippines (STRAP). Blued pledged to donate P100,000 to these organizations to help ease the lives of the beneficiaries during the pandemic. They are also inviting their followers to donate and connect with the said organizations.

More than anything, Pride is a feeling. Pride is a protest against all injustice, especially towards minorities. Learn, speak up, and participate! 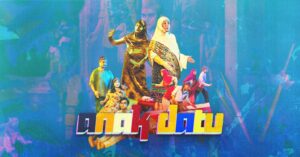 An Islamic spectacle that showcases their struggles. The Philippines’ Struggle.