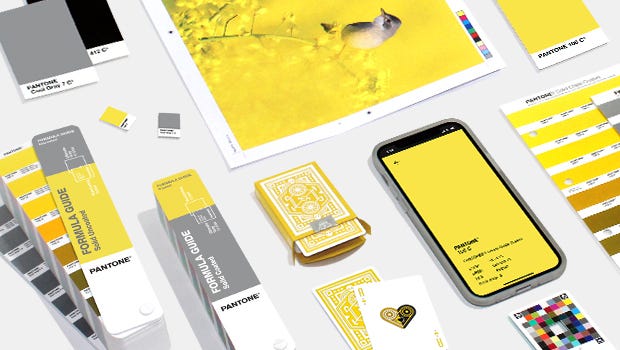 For the second time in its twenty-year history, the PANTONE Color Institute has picked a duo as its 2021 Color of the Year.

These are PANTONEÂ® 17-5104 “Ultimate Gray,”  a quiet, steadfast shade that evokes an attitude of “composure, and resilience,” and PANTONEÂ® 13-0647 “Illuminating,” an optimistic variant of yellow that’s reminiscent of warmth, optimism, and vigor as if of a sunny day.

Learning about the emotions associated with these colors, we immediately understand why PANTONE made their selection: to convey a “message of strength and hopefulness that is both enduring and uplifting,” a message that we could all carry with us as we move forward from an unprecedented year.

For PANTONE, the combination is vital in conveying a message of unity. Amid a chaotic period defined by populations cooperating to fend off a global pandemic, and citizens banding together to seek racial and political justice, our yearning for connection rings louder than ever. These two color choices accurately represent the relationship we all hope to have and need to build.

“Something that’s been apparent across the board is how much we need each other, that these connections with others have given us strength and fortitude, as well as the hope and the positive outlook that are essential to our moving forward. By choosing two independent colors, that helped us subliminally convey that message,” Laurie Pressman, vice-president of PANTONE, shared, as per TIME.

But this isn’t a new move for the institute. The first time PANTONE chose a tandem for Color of the Year was back in 2016, when they decided that Rose Quartz and Serenity were symbolic of the year’s culture.

In some ways, this year’s rationale could also be applied — 2016 also served as witness to many social upheavals ahead of the United States elections and Donald Trump’s imminent inauguration as president. The year was also marked by various movements that espoused gender equality and fluidity.

Whether PANTONE names one, two, or even a handful of Colors of the Year, their forecast will always stand for the spirit of the times. Thus, you can expect Ultimate Gray and Illuminating to cascade towards all design outputs — fashion, architecture, visual design, and art.