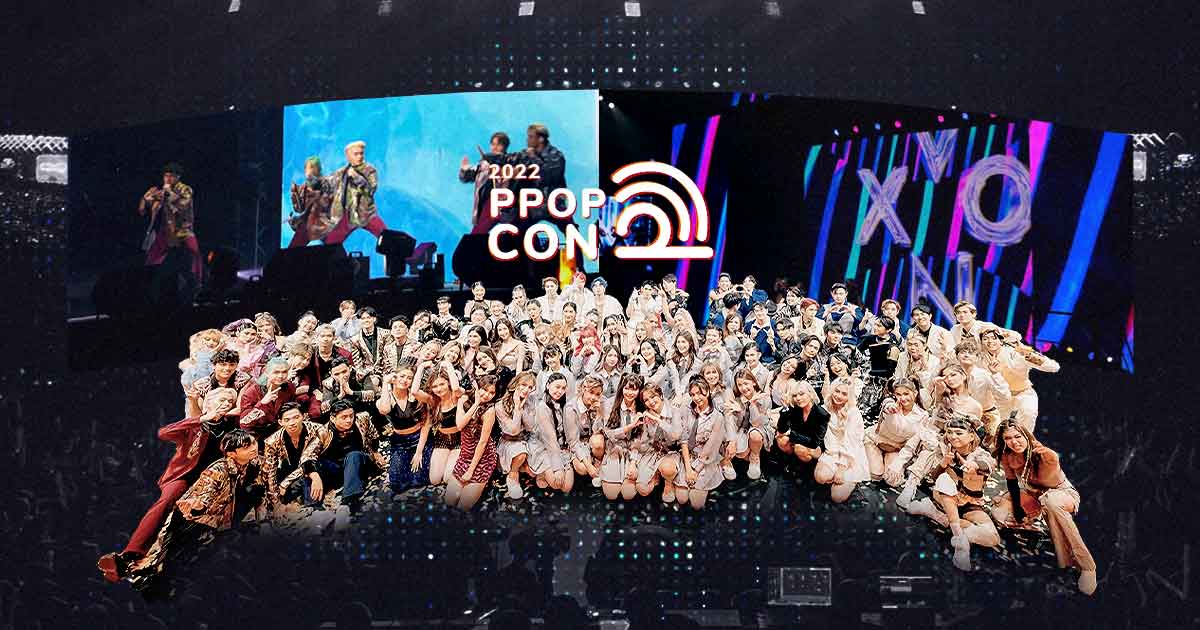 Best Moments Of PPOPCON 2022: All Hits, No Misses

P-Pop groups came together to share their music and artistry with eager fans.

The two-day PPOPCON from April 9-10 was capped beautifully by a much-anticipated concert at the Araneta Coliseum. It marked the first time P-Pop stans would be able to see all of their faves under the same roof.

Held on the conference’s second day from 3:00 PM to 7:00 PM, the PPOP CON concert was a hybrid. Aside from the audience in-house, the show was also streaming simultaneously online for “Team Bahay.” While it was a celebration for P-Pop artists and fans alike, on a larger scale, the show also served as the first major revival of live events after the pandemic essentially closed everything down for years.

KAIA was the first act to take the stage. SB19’s “little sisters” are under ShowBT Entertainment, and they certainly made their mark that night. Aside from performing their pre-debut single KAYA, they also did their latest single, “BLAH BLAH”’, much to the delight of their beloved fans, known as ZAIAs.

G22, the surprise addition announced the day before, came next. Their fans, the Bullets, were blown away by their single “BANG!” It was an emotional moment for the girls, who debuted at the concert. “We’re so blessed and grateful that we’re here today, sharing the stage with our seniors,” G22 main vocalist Jaz said. “Enjoy the rest of the show, Araneta!”

The “monster rookies of P-Pop,“ VXON, rounded out the opening acts. Like G22, the boys are also under Cornerstone Entertainment. Their visual trailer had their fans, the Vixies, shrieking. What followed was an energetic performance that included their debut single, “The Beast,” and “P.S.,” their follow-up.

Beloved girl group 4th Impact then took the stage. Perhaps best known for their stint on The X Factor UK, they are now under ShowBT Entertainment. They performed their latest single, “Here We Go,” followed by a medley of songs from The Greatest Showman. The four-piece’s last song was their much-loved cover of the Ariana Grande, Nicki Minaj, and Jessie J hit “Bang Bang.”

With their song Win, Press Hit Play followed suit. It was a treat for their PEARLS since they executed sharp dance moves despite being in suits. After treating them to another danceable hit with “Tell Me,” the boys then slowed things down with a song called “Sambit,” which they dedicated to their families “at sa mga taong patuloy na lumalaban.”

BINI was next, met by screams from their darling BLOOMS. Starting with “Born To Win,” they dazzled with black-and-gold ensembles that highlighted the rich tones in their singing voices. As they thanked the crowd, they also gave a verbal nod to their “agency brothers,” BGYO, who were also in the concert’s lineup. As an ode to how far they’ve come, they finished their set with “Da Coconut Nut,” the first song they ever released. (Yes, it’s a fresh take on Ryan Cayabyab’s composition.)

Things got very red quickly afterward. It turned out to be a special overture and trailer for the entrance of boy group 1st.One, who started the performance of their debut song, “You Are The One,” with a special dance break that was neatly choreographed and executed. Of course, they gave a special shout-out to their ‘For.One’ fans. The boys acknowledged that the pandemic would have been rough going for P-Pop without the fans. “Pare-pareho tayong nakadena ng pandemic,” special member Gift said after he was brought on stage, “pero ngayon nandito tayo live na live sa Araneta!”

P-Pop sensations ALAMAT took the stage next. The boys, known for representing multiple cultures in the Philippines, were incredibly well-received by their beloved ‘Magiliw.’ Opening with their single “ABKD,” they drew screams as they dove into various Philippine dialects in the lyrics, including Hiligaynon, Bicolano, Waray, and Zambal. They also performed “Sa Panaginip Na Lang,” a sweet ballad. Of course, no set of theirs would be complete without the fan-favorite “KASMALA,” complete with the Magiliw logo appearing in the visual effects as they performed.

True to their name, BGYO stormed the stage next. The former Star Hunt trainees wasted no time, coming in hot with their hit song, “The Light.” When they introduced themselves with their signature ‘Mabuhay!’, it was as if a thunderstorm rippled through the crowd. “Kundiman” came next, a slow song reminiscent of springtime drizzles. Before they went into their last song, “The Baddest,” they took the time to promote their upcoming song, “Best Time.” It will be on the soundtrack of He’s Into Her season 2. They took the time to get in position for a very special greeting: “Happy anniversary, ACES!” That gesture was met with intense gratitude and shrieks from their fandom.

The girls of MNL48, the Philippines’ first-ever idol group, graced the stage afterward. The idol group, formed in 2018, is an international sister group of Japan’s AKB48. It was their first live performance since the release of their new single. For their first song, they did “Palusot Ko’y Maybe.” After MNLOVE fave “High Tension,” they performed their latest hit, “NO WAY MAN.”

The much-anticipated “Kings of P-Pop,” SB19, had a long set for the evening’s final act. It began with the fans, A’TIN, worrying about technical difficulties. What seemed to be an intro for their hit song “WHAT?” dropped off into seconds of pitch-black nothing. As it turned out, SB19 leader Pablo had a surprise rap introduction. The screaming and shrieking while they performed hit after hit, including “Bazinga” (which landed them seven weeks at #1 on Billboard’s Hot Trending songs chart), seemed likely to blow the venue’s roof off.

As the cherry on top of it all, for the last song, “SLMT” (a Pablo-penned original dedicated to the A’TIN), the boys called all the other P-Pop groups onstage to join them. It became a joint celebration of the scene, the artists, and the community of fans that bound everyone together in love for the P-Pop genre.

The PPOP Convention’s concert was a unique, magical night of artistry and camaraderie. Well and truly one for the history books. The message is clear: P-Pop is here to stay, and it’s only going to keep rising!