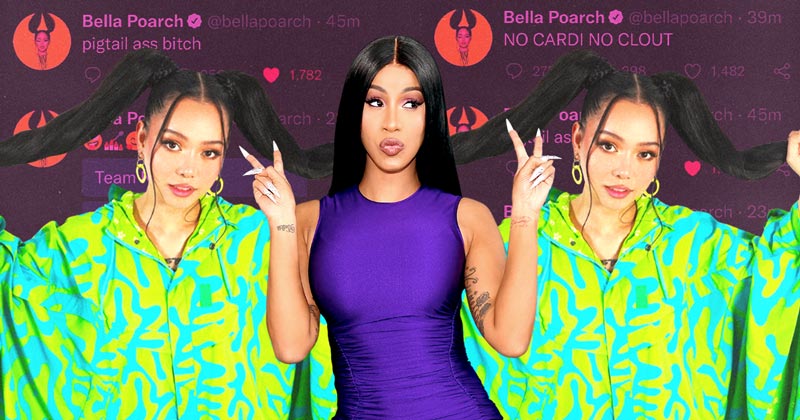 Did Bella Poarch really throw shade at Cardi B?

Filipino-American singer Bella Poarch got in trouble on Twitter recently, and it had to do with rapper Cardi B.

It all started when Bella’s account dissed Cardi in some tweets, and it took hours before the tweets got deleted. Even after the tweets disappeared, netizens were able to screenshot them. The incident became a trending topic.

bella poarch got hacked and the person who hacked her hates cardi and tweeted ‘no cardi no clout’ what is going on ? pic.twitter.com/IPva3Mv517

Before Bella’s account took down the tweets, Cardi was still able to respond and wrote, “Haha .. I got a better one,” while posting Bella sliding into her Instagram DMs last March saying, “Hiii. I’m a huge fan of ur [sic] music” with a heart emoji.

After the commotion online, Bella addressed the issue on Twitter. She attempted to clear the air. She claimed that her account got hacked and vehemently denied posting the tweets.

The “Living Dolls” singer then apologized to Cardi. She said, “Someone hacked me while I was asleep but everything’s okay now. And I’m so sorry to @iamcardib for the dumb s**t that was tweeted.”

Hey guys it’s Bella…I just woke up to this mess an hour ago and I’ve been working with Twitter to get back into my account. Someone hacked me while I was asleep but everything’s okay now. And I’m so sorry to @iamcardib for the dumb shit that was tweeted.

Did Bella actually diss Cardi B?

To clarify the ‘ruckus’, Cardi explained what happened behind the scenes. Bella’s team reached out to Cardi’s team. They explained that the diss tweet came from Bella’s social media manager. The latter posted it while Bella was on a brief social media detox.

“Bella had, like, a social media that [posts] tweets and everything. He tweeted that because, you know, he thought it was funny, he thought it would get traction,” Cardi said.

“I’m not mad at Bella Poarch. I want people to stop coming for her because it’s not her fault. I don’t like when people over bully people if they didn’t do anything because that causes stress,” she continued.