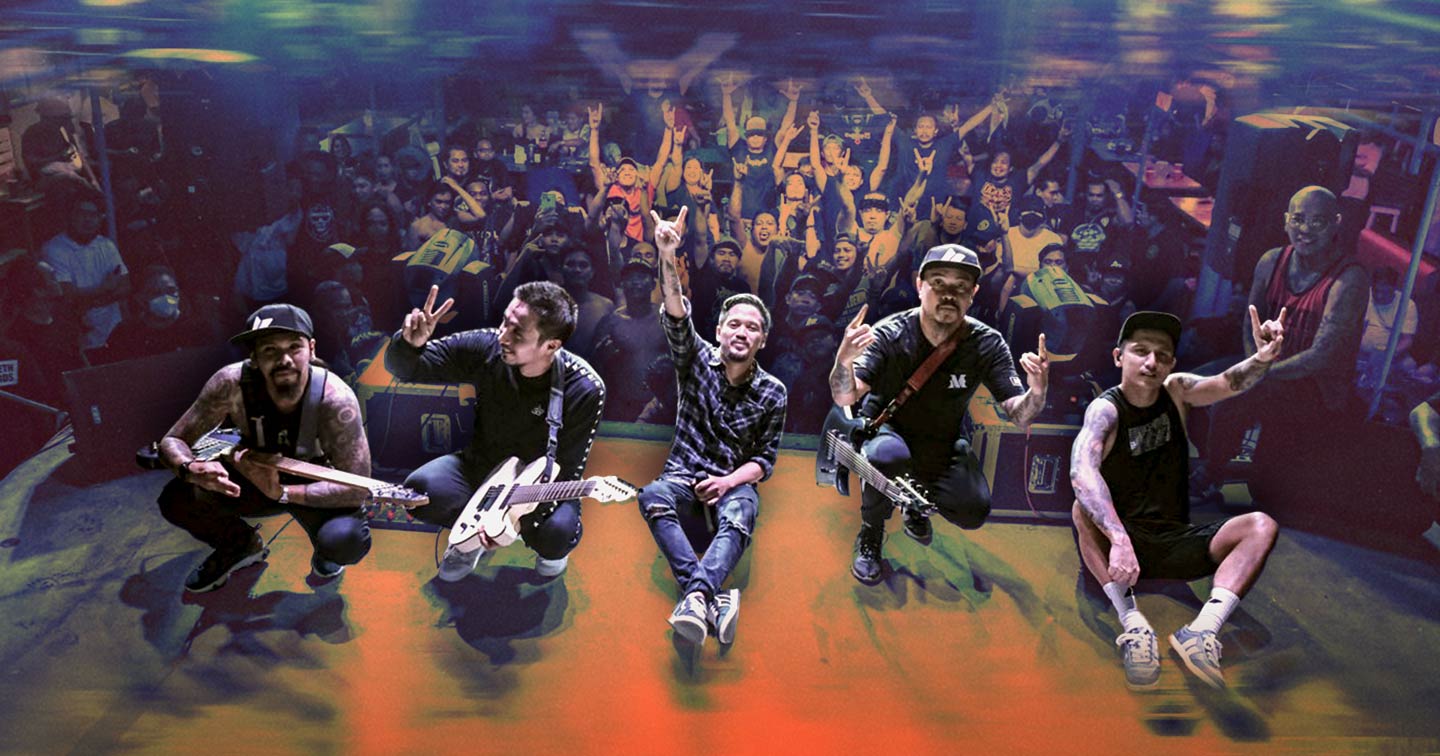 The all-star metal-core act djent-ly breaks down the jazz and blues in the band.

Midnight Cubao will always be filled with eerie gloom. Usually, it is lit by strip club neon hues that color the emptiness of its streets. While the busy district sleeps in a complete abyss, I was invited to go to a staple rehearsal studio called KNR. The invite was to interview an uprising band known for its prominent rock and metal figures—Chelsea Alley.

For those who don’t know, Chelsea Alley is a powerhouse hard rock/ metal-core act. Its members are composed of Ariel Lumanlan (guitars), Lean Ansing (guitars), JL Siscar (bass), and Chi Evora (drums). The band is a melting pot of Filipino nu-metal, and hardcore acts from Slapshock, Chicosci, Arcadia, and Even. To spice things up, it is fronted by the Pinoy Stone Temple Pilots vocalist we never had, John Borja.

As I entered the studio, vocalist John nodded with an honest broad grin. Then I started throwing fist bumps and high-fives at other band members. They then offered a seat, and I was lucky enough to have a front-row seat to a live performance of their song, “Heneral.” From there, I snapped photos while they played.

After a six-hour practice, the band finally started to pack their gear. We then started the interview. I ask first how they got the name, and Evora mentions that it came from the combination of his and Ansing’s street.

Evora and Ansing are former members of Slapshock. The band had its darkest days in 2020, from the tragic time they needed to disband to losing one of its family members, Jamir Garcia (RIP). From there, I inquired how they formed Chelsea Alley.

Flashback to 2016, Borja was scouted by Stone Temple Pilots to be a candidate as their new vocalist. He was left to return to the Philippines as eliminations reached the final bout.

How did Borja end up with Chelsea? Evora mentions that Ansing sent him a video of Borja singing a cover of Linkin Park’s song on YouTube. After seeing the video, they then contacted Borja. “Game kaagad siya,” remembers Evora. This ignited a new light underneath all the darkness since Borja thought he had reached the cliff of his music career.

Arguments—even fist fights—happen, especially when a band is in the middle of songwriting. I was curious to ask them about their constraints and whether they had any major arguments.

In arranging riffs, Evora explains that they apply their Slapshock formula when composing with Chelsea Alley. However, this time it depends on who has ideas to throw. Ansing mentions that every member is given a chance to pitch their input. “Kumbaga kung sinong may idea, sinong may concept,” Evora reiterates.

Borja confirms that their single “Heneral” was written while playing with a midi keyboard. He also adds that a heart-to-heart talk with Evora inspired his writing of the lyrics.

According to the frontman, he had a deep conversation with the drummer, which he later carried home. As he wrote it, he realized that the song was for his late hero, Jamir Garcia (RIP).

Their first releases have a strong resemblance to the metal-core act called Architects. Of course, I had to ask if it played a major role as an influence. Evora nods. Then Ansing adds that it was indeed the peg when it comes to screams of their first effort.

Borja also shares that Ansing guided him to the vocal process of the song “Heneral.” Evora confirms this, saying that while Borja had a high vocal range, the band pushed him through, achieving a rawer feeling to the songs. Evora shares: “Abot niya eh. Kumbaga gaspangan niya lang [yung boses].”

There’s no denying that Chelsea Alley fans are the same as Slapshock. Going to their gigs, you might still hear them covering Slapshock songs. So, I asked them how they overcame that identity and inevitable comparison.

Working out a new album that provides their voice as a collective is what Ansing stresses, “Yung major na makakapag-define ng difference ng Chelsea Alley sa Slapshock.” He also validates that there might be times when they’d play songs from their former band, but he adds that, eventually, “It’s all Chelsea Alley.”

As of the moment, they have six songs in total. Two have been released as singles, “Heneral” and “Bangon.” Knowing that their sets are usually long, Evora mentions that they play songs from the former band to fill some gaps.

Evora confirms that their album might drop in the first quarter of next year. He also mentions that they will “hopefully” finish the songwriting by December.

First drops are usually an experiment for numerous bands. I tell them that based on observations, debuts are generally a mixture. For coherence, Ansing shares that their experiences will help them know what fits well to a song.

In terms of leadership, they mention that they have one. Ansing then jokes that it was their manager, Joey Dizon. Then Lumanlan quips that it’s him and Siscar. Everyone had a good laugh.

There is no denying that there is an uplifting message in the lyrics of Chelsea Alley. I asked if there was advocacy behind it.

Ansing comes clean and says that it isn’t advocacy. He stresses that it might happen by chance. Since the pandemic happened, they have overcome extreme situations and constraints like others.

Borja adds that he integrated lines from the problems he faced during lockdowns with “Bangon.” He says there were no gigs when it started, leaving him broke.

I thanked them for the interview. The boys then jested about having anything to ask their bassist, Siscar. When I ask if JL is officially the band’s bassist, they say they are still waiting for him to agree.

They also said that if someone wants to invite them over, they must contact Joey Dizon. Lumanlan also added that you could get updates via their social media accounts.