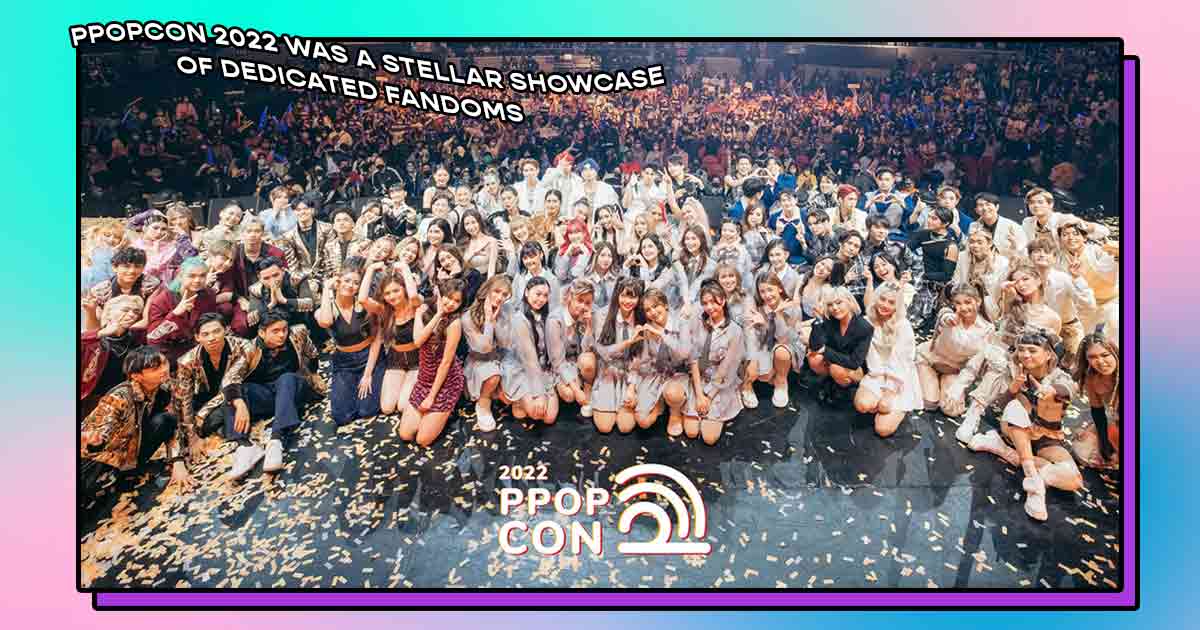 Fan Behavior: PPOPCON 2022 Was A Showcase of Dedicated Fandoms

The fans went all out to support their faves!

On the first day of the big PPOPCON weekend, fan clubs of all stripes gathered at the New Frontier Theater. Their effort was evident in the decorations and merchandise that filled their booths.

Freebie MNL got to ask some of them questions amidst the hustle and bustle of it all.

According to a ZAIA named Icy, she discovered KAIA via SB19. “I flipped out when I realized Sophia Mercado was in the group. She’s had a storied career, which includes an appearance on NBC’s World of Dance with the VPeepz.”

Icy had a great time at the PPOPCON, even if she’s “a bit of a Tita in the fandom” since she’s in her 30s. Despite her age, she cried when KAIA took the stage at the Big Dome.

“It’s only the beginning for them. I became emotional when I heard their pre-debut single ‘Kaya’ for the first time. Seeing them perform it live made me even more emotional,” she shares.

Icy advises those who want to get into KAIA to start with the members’ individual stories. “They’re all amazing, and the way they came together is magic.”

How this fan got ‘VIXIEnated’

The “Monster Rookies of P-Pop” also have a growing fanbase. C13, Franz, Patrick, Prince, and Sam blew everyone away during their PPOPCON performance. They call their fans VIXIES.

Anne first stumbled across VXON in December 2021, but she didn’t become a fan of the group until much later.

“I saw a clip of them dancing at a Christmas party. When they released ‘The Beast,’ I became a casual listener and follower. It was only when I saw them at the Wish Music Awards that I became a full-fledged VIXIE. VXON has it all—attitude, talent, and visuals. I want to be part of their journey. To be the one to push them if they feel like giving up,” she says.

When PPOPCON tickets went on sale, Anne glued herself to her laptop. Her efforts paid off, as she secured a ticket and went on to have the time of her life.

“What’s nice about the convention is that it brought people together. I was hopping from one booth to another, meeting fellow P-Pop fans. Artists visited the booths of their fandoms, so we had a close encounter with them. After the convention, my body and legs were aching, but it was definitely worth it,” she says.

Some of this group’s members are former ShowBT trainees. In fact, Press Hit Play’s original lineup included Pablo of SB19. No wonder Twitter got emotional over footage of Pablo watching PHP backstage.

That said, the refreshed Press Hit Play has begun to make its own mark on the scene. Chris, JP, Sev, Yukito, Yuuki, and Zi.O received a warm welcome at their fans’ booth on PPOPCON day 1.

“It was an emotional moment for me,” says Yonko, an admin of Press Hit Play’s PEARLS. “We didn’t expect a lot of fans would cheer for them. There weren’t many people at our booth. But when the boys arrived, the crowd swarmed around them and knocked me off my feet. Still, that was one of my favorite moments because I saw how happy the boys were.”

Watching Press Hit Play perform at the Araneta Coliseum was the proudest moment of her life as an admin. “Working on the booth stressed me out. But seeing Press Hit Play onstage made me realize that nothing worth having comes easily.”

From casual fan to MAGILIW

The fans of Alas, Jao, Mo, R-Ji, Taneo, and Tomas—collectively known as ALAMAT—held a car trunk merch giveaway on day 2. MAGILIW NCR Admin Pearl says they did it to introduce ALAMAT to casual listeners since PPOPCON brought multiple fandoms together!

Meanwhile, Riya became a MAGILIW when a friend of hers shared the group’s “Kasmala” music video with her. A history buff, Riya loved that the boys use elements of Filipino culture in their music.

“I became a fan because I believe in their talent and advocacy. I want to help promote them in any way I can,” she says.

As Riya tells it, the concert was a blur. A fun, surreal blur. “I couldn’t believe I was finally seeing them live. Now that it’s over, I’m glad they finally saw that there are a lot of people who love and support them.”

Riya had a blast at the concert, but day 1 will always be close to her heart. “I bonded with my fellow volunteers and met a lot of people from different fandoms. It was a memorable experience.”

What would a P-Pop convention be without these trailblazers? Led by center Abby Trinidad, AKB48’s Filipino sister group showed up in full force. Their fans, known as the MNLoves, were especially excited to see them.

Enrico used to be a hater until he caught MNL48’s performance of “Talulot ng Sakura” on It’s Showtime. Now, he says he wouldn’t have attended the PPOPCON if the girls weren’t part of it.

“The concert was my favorite part. I enjoyed the performances, especially since it was the first time the girls performed ‘NO WAY MAN’ in full. They were very refreshing to watch, full of energy and fun. They stood out among the other groups’ dark, edgy concepts,” he says.

Meanwhile, Jonathan was a fan of the J-Pop act Morning Musume. He decided to check out MNL48 because they take after the Japanese idols he loves. But he soon realized they have their own unique charm. To say he was proud of what they did at the Big Dome is an understatement.

“To finally see them perform on a big stage and do the fan chants with them was exhilarating,” he says.

Enrico says those who want to check out MNL48 shouldn’t be intimidated. “MNL48 is an active experience. You get to interact with them and see their growth. It’s a journey, which can be exciting and frustrating. But like everyone else, the girls have a dream and a story to tell.”

Jonathan adds, “They’re not like girl groups from Korea or the West. That makes them a fun, refreshing listen. The girls are engaging, especially during live events. No other group will let you see a diamond in the rough evolve into a star. Sharing that journey with the girls is an experience like no other.”

READ: Best Moments of PPOPCON 2022: All Hits, No Misses

All told, fandom culture has been around for a while. Thanks to advancements in technology, it has evolved into a more personal experience. The rise of P-Pop is the perfect example of how appreciation from fans can change things for the better!