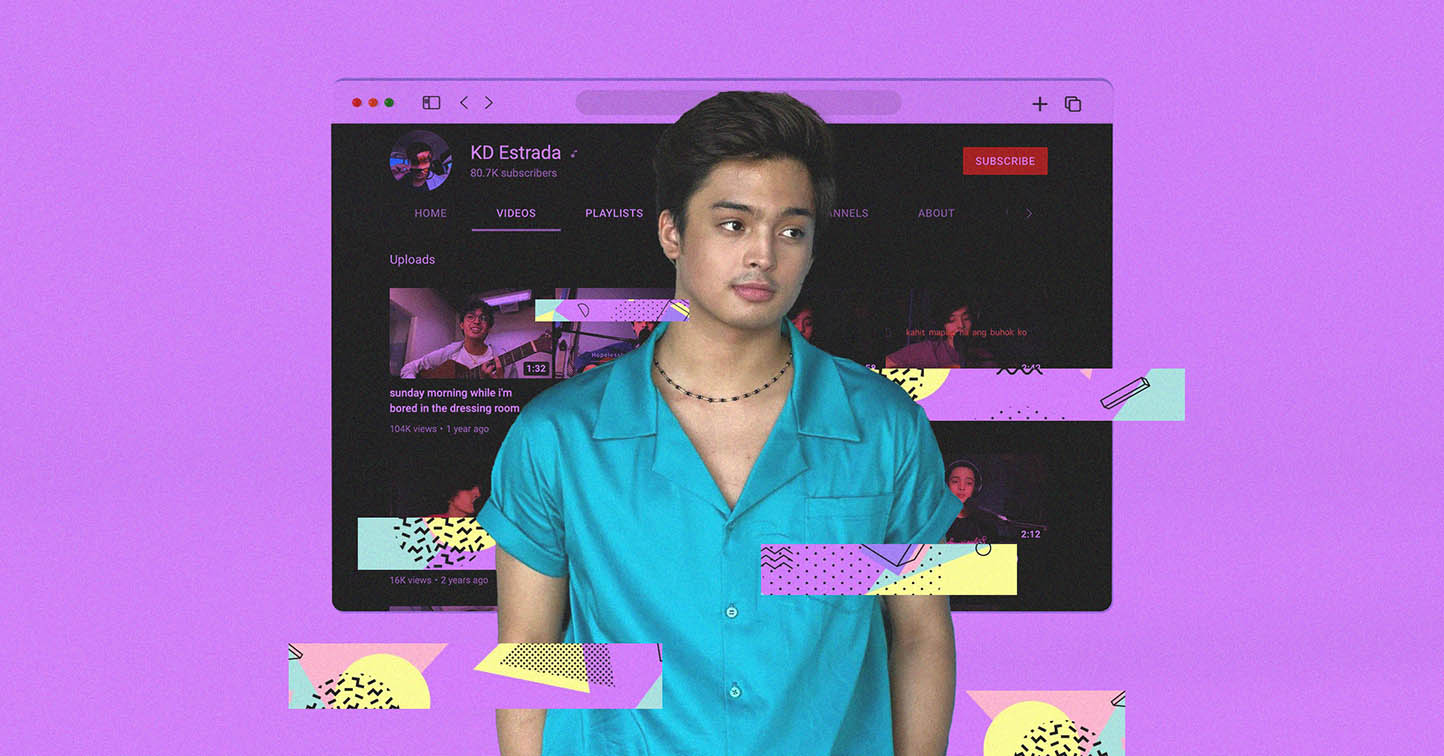 Here’s what we learned about him from watching his content.

KD Estrada is no stranger to YouTube. Last year, he joined The Squad 2022, a group of young stars who run a YouTube channel with over 3.31 million subscribers. They would regularly post challenges, games, and song covers. But this article isn’t about that channel. It’s about KD’s personal one—and what it can tell us about him as an artist, musician, and person.

I stumbled across KD’s personal YouTube channel while he was inside the Pinoy Big Brother house. I had fallen into a KDLex rabbit hole because of the show. Alexa Ilacad had a YouTube presence before she became a housemate, so I decided to see if KD did too. As it turned out, he also had a channel that continued to grow while he was inside one of the most famous houses in the country. I believe that’s a testament to how many people fell in love with him, Alexa, and their tandem. But I digress.

As of this writing, KD’s personal YouTube channel has been dormant for more than a year. But there are still plenty of things to love about it, even if his videos are old.

What’s on his channel?

First, there are his covers of Moira dela Torre’s “Mabagal” and “Ikaw At Ako” on YouTube Shorts. I think KD and Moira have a lot in common. Not only are they both insanely talented songwriters, but they also have unique tones that draw listeners in. In KD’s case, no one else sounds like him. In this country where gifted singers are a dime a dozen, the fact that KD’s tone stands out says a lot.

Another thing that you can tell about KD based on his YouTube content is that he’s something of an old soul. Most of the songs KD covered, like “Build Me Up Buttercup” and “I Will,” are from decades past. “Moon River” is probably the oldest song in KD’s repertoire. It was first performed in the 1961 movie Breakfast at Tiffany’s by Hollywood legend Audrey Hepburn. “Moon River” won an Oscar for Best Original Song that same year. In 1962, it won two Grammy Awards for Record of the Year and Song of the Year.

KD also covered another song from a movie. For Valentine’s Day 2021, he sang Olivia Newton-John’s “Hopelessly Devoted to You.” Newton-John’s personal producer John Farrar wrote and produced the song in 1978 for the film version of Grease. It wasn’t part of the original musical but was used in Fox’s Grease: Live television special in 2016.

He also did a cover of “Forevermore,” which was the signature song of Side A. For those who may not be familiar with Side A, they were a Filipino band formed in 1985. Side A was quite big in the 1990s. Joey Benin, father of Gen Z singer-songwriter Clara Benin, played bass for them back in the day.

I particularly enjoyed his cover of “You’re Still the One” by Shania Twain, which was released as the third single from her third studio album, Come On Over. It hit No. 2 on the Billboard Hot 100 for nine weeks in 1997, five years before KD was born. (You should also watch his cover of Maroon 5’s “Sunday Morning.” The song’s honeyed, soulful vibe is perfect for KD.)

One of the best things about KD is that when he does covers, he makes them his own. Not only does he switch up his phrasing, but he also does that with melodies. He’s good at that because he can play the guitar. But covers aren’t the only type of content on his channel. He also tried his hand at being a vlogger. He comes across as quite charming and passionate in his vlogs (which I assumed he filmed before Pinoy Big Brother Kumunity Season 10).

I hope KD never loses that passion, even as his career blows up. I look forward to seeing more from him (and Alexa, of course) on Kumu, the silver screen, and the small screen. But I do hope he revives his YouTube channel someday. That would be awesome.