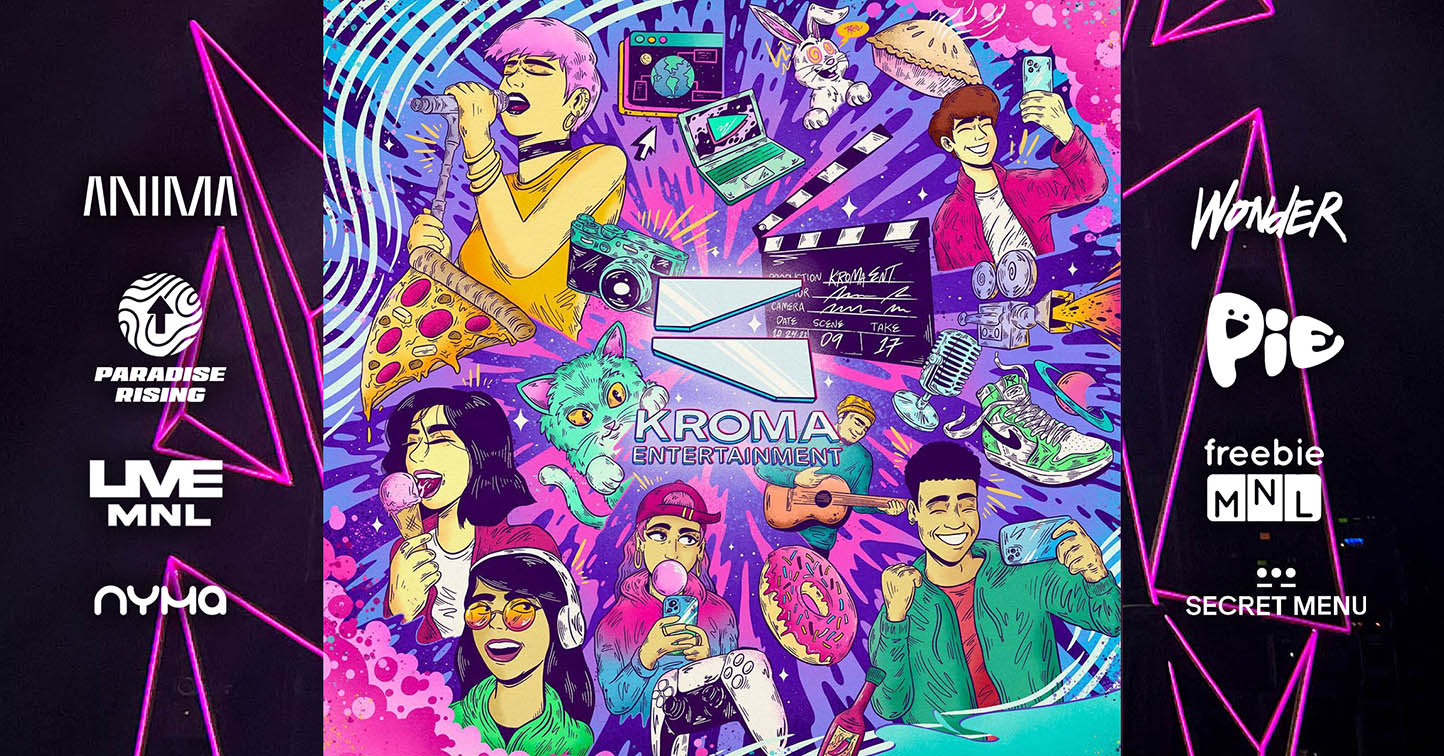 The tradigital company celebrated its breakthroughs.

KROMA Entertainment has only been around for less than a year, but it’s already a force to be reckoned with. In six months, it hit key milestones through its brands—ANIMA, KROMA PubCo, LiveMNL, NYMA, Paradise Rising, PIE, and Secret Menu—with incredible ease and speed.

During an on-ground event called “KROMA Overload” last October 24, CEO Ian Monsod (and KROMA’s other leaders) talked about those milestones. Media friends and trade partners got to see what’s in store for KROMA Entertainment in 2023.

Company leaders said storytelling is central to KROMA’s craft. But Filipinos’ listening and viewing habits have changed. Podcasts have become the go-to for those looking to consume content without suffering from screen fatigue. The Philippines is currently ranked 6th among the fastest-growing countries in podcast listening, with 31 million monthly listeners.

Content creators have also become go-to sources of entertainment. They offer authentic takes on subjects close to their hearts through social media. Lastly, for tradigital channel PIE, storytelling is done with the audience’s input, which is gathered through mood meters, polls, or quizzes.

With all these changes, KROMA’s trailblazing film studio ANIMA does storytelling through film by being courageous when it comes to genre-bending and focusing on underrepresented stories and characters. In so doing, it offers viewers worldwide quality entertainment.

Recently, ANIMA proudly shared that On the Job: The Missing 8, the first HBO Asia Original series from the Philippines, was nominated for Best TV Movie/Miniseries in the International Emmy Awards. It’s also the country’s official entry to next year’s Oscars. That’s far from the only accolade it earned. John Arcilla took home the Volpi Cup at the prestigious Venice Film Festival in 2021.

ANIMA films, Leonor Will Never Die and Kun Maupay Man It Panahon, also made waves in the global scene. Both won jury prizes at this year’s Sundance and Locarno Film Festivals, respectively.

PARADISE RISING is KROMA’s very own record label, formed in partnership with 88rising. Its goal is to champion Filipino creativity in the global music scene.

It has certainly done that with Filipino-Australian singer Ylona Garcia, who’s making waves worldwide. She earned over 300 million streams across different audio and video platforms for her songs. Her “Entertain Me,” which she co-wrote, is the theme song for NEON, the first Filipino agent of Riot Games’ Valorant.

Meanwhile, the label released the third installment of its semilucent compilation series during Filipino-American History Month in October. The genre-bending compilation album, which features an impressive array of emerging Filipino artists, is now out worldwide.

LiveMNL, KROMA’s full-service activations and events agency, is bringing Head in the Clouds to Manila on December 9 and 10. The local staging of America’s biggest Pan-Asian music festival will be held at the SM Festival Grounds in Parañaque City. It promises to bring all attendees a memorable experience of art and music.

Making waves in entertainment and publishing

KROMA’s other brands have also achieved much in less than a year. NYMA, KROMA’s influencer and talent management agency, has signed four talents: Frances Cabatuando, Kristel Fulgar, Morissette, and Raco Ruiz. Its bookings business is also booming, with over 40+ creators and talents signed.

What’s next for KROMA Entertainment

During the fun-filled event, ANIMA also shared its exciting lineup for 2023. Nego King Philippines, a local adaptation of the popular Korean series of the same title, will delight audiences with host Sam YG’s negotiating skills to seal special deals with popular brands.

Kroma PubCo also announced the launch of Complex Philippines in 2023. As one of the most recognizable media brands for youth culture in the US, there is much to look forward to when it comes to content and experiences related to music, sneaker culture, and sports.

There’s more to come from KROMA and its brands in the coming months. As CEO Ian Monsod said in his opening remarks, this is just the beginning.