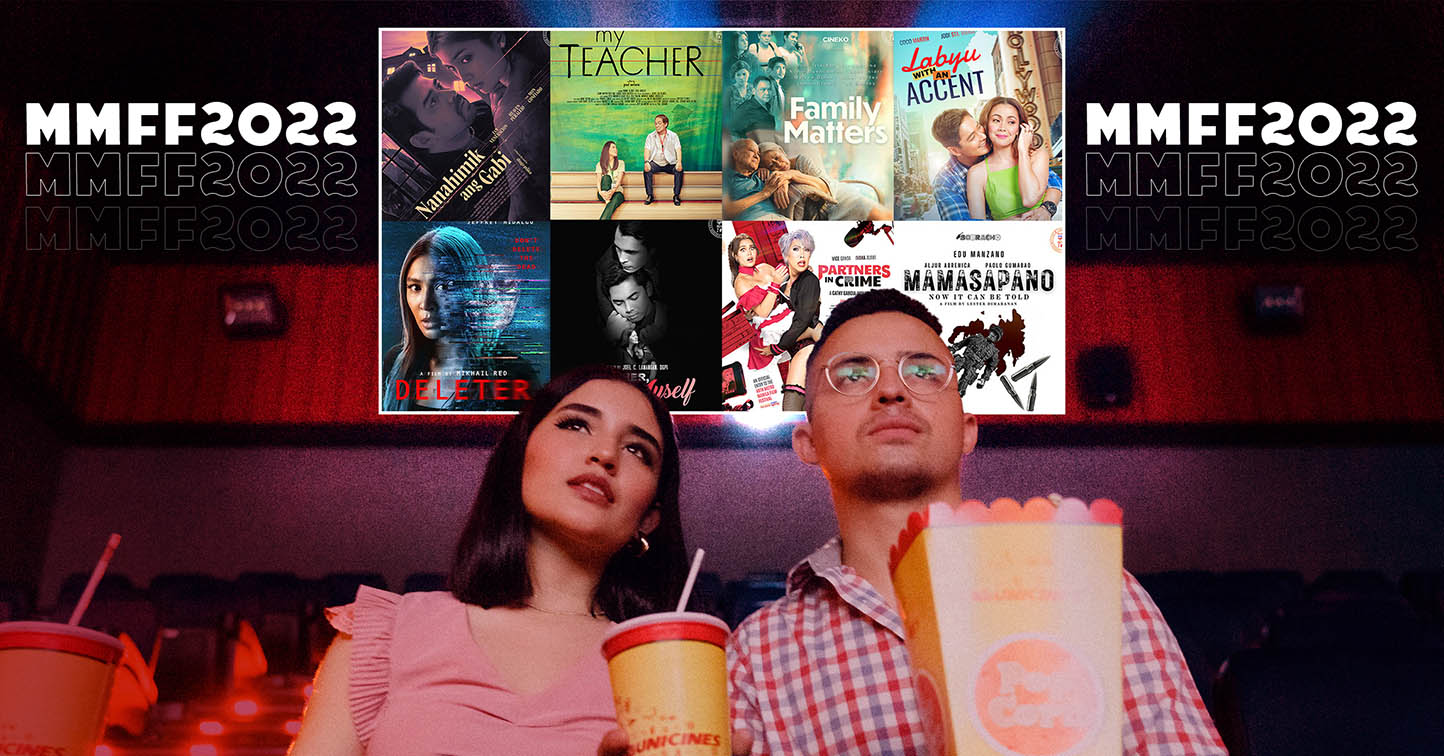 Things To Know About MMFF 2022 Entries

The yearly Christmas film tradition is back

The annual Metro Manila Film Festival tradition continues this year for its 48th edition, aptly bannering a theme of “Balik-Saya sa MMFF 2022.” This is the third MMFF that happens amid the pandemic, with a positive outlook as more moviegoers return to the cinemas this year.

The yearly festival begins on Christmas Day, December 25, 2022 and ends on January 7, 2022. The parade of the stars took place on December 21, 2022 along Quezon Avenue and the “Gabi ng Parangal” awards night will happen on December 27, 2022 at the New Frontier Theater.

This edition of the MMFF has eight entries that caters to all lovers of different movie genres—from horror to comedy, drama to action. Of course, each movie outfit boasts big names headlining their films, as well as newbie actors who are given the spotlight to prove their acting mettle.

Vice Ganda, who has been on hiatus from the MMFF for two years, returns for his first pandemic movie. Nadine Lustre, Ian Veneracion, Toni Gonzaga, Joey de Leon, Jake Cuenca, Dimples Romana, Edu Manzano, Jodi Sta. Maria, and Coco Martin are the other big names headlining each of their entries. Silver screen newbies such as Heaven Peralejo, Sean de Guzman, and Ivana Alawi are getting the top billing for their movies as well.

Here are the eight entries of the 48th Metro Manila Film Festival in alphabetical order:

This horror movie produced by VIVA Films headlines Nadine Lustre, Louise delos Reyes, and McCoy de Leon. Directed by Mikhail Red, “Deleter” tells the story of Lyra (Lustre), an online content moderator who deletes a suicide video made by her co-worker. After this, a spirit starts to haunt her, opening more secrets and issues that she has to face.

According to Red, Lustre is the perfect choice to star in “Deleter.” In an interview with RX93.1’s “All Out,” the acclaimed director says about Nadine, “Top of mind siya talaga naisip namin…she’s a very technical actress, and I like working with her because I think I always mention this sa mga Q&A but she likes films. She also watches a lot of horror movies so she has that taste and sophistication to kind of pull off a character like Lyra who’s very internal.”

“Family Matters” boasts a huge cast of veteran and critically-acclaimed actors from different generations, perfect for a family drama this Christmas. It headlines Liza Lorena, Noel Trinidad, Nonie Buencamino, Mylene Dizon, Agot Isidro, James Blanco, Nikki Valdez, Ian Pangilinan, and JC Santos. This feel-good drama tells the story of an old couple who has found themselves being passed on by their children regarding who should take care of them after the patriarch suffers from stroke.

The movie is written by Mel Mendoza del Rosario, directed by Nuel Naval and produced by Cineko Productions. As early as November 2022, viewers have been excited with the movie; its trailer even reaching five million views in one day. Its theme song is Rey Valera’s hit “Kahit Maputi Na Ang Buhok Ko.”

According to an article by PEP.ph, the original choice for Lorena and Trinidad’s roles were Boots Anson Roa-Rodrigo and Ronaldo Valdez, respectively. One of the cast members, James Blanco, also acts as co-producer for the movie.

Labyu With an Accent

“Labyu With an Accent” features the team-up of Coco Martin and Jodi Sta. Maria, who both lorded ABS-CBN’s primetime block this 2022 with their respective shows “FPJ’s Ang Probinsyano” and “The Broken Marriage Vow.”

The film tells the story of Gabo (Martin) and Trisha (Sta. Maria), two people with very different backgrounds. The two cross paths when Trisha returns to the Philippines after a heartbreak and avails Gabo’s services of the “Ultimate Jowa Experience” in order to move on. However, the business deal becomes real as Trisha returns to the States and Gabo follows and pretends to have an extravagant life to please Trisha’s uptight parents.

It also serves as the first project of GMA artist and Sexbomb leader Rochelle Pangilinan under ABS-CBN. No, she’s not transferring networks, but she is lucky enough to have been allowed to be “borrowed” by Star Cinema since she does not have an existing film contract with other film outfits.

Mamasapano: Now It Can Be Told

This action-drama film is headlined by Edu Manzano, Paolo Gumabao, and Aljur Abrenica. It is based on the true story of “Oplan Exodus,” a bloody police operation that claimed the lives of 44 Special Action Forces officers (SAF 44) that happened in Mamasapano, Maguindanao in 2015.

Claudine Barretto also has a special participation in the film. “Mamasapano: Now It Can Be Told” is produced by Borracho Film owned by Atty. Ferdie Topacio with Lester Dimaranan as director.

“My Father, Myself” tackles a controversial love affair that entangles the lives of a family, and stars Jake Cuenca, Dimples Romana, Tiffany Grey, and Sean de Guzman. It starts with Matthew (de Guzman) being adopted into the family of Robert (Cuenca). Secrets are later revealed as Robert used to have an affair with Matthew’s father. Meanwhile, Robert’s daughter, Mika (Grey), is in love with Matthew and trapped him into marriage by getting pregnant. Much to the shock of Robert’s wife (Romana) and daughter, Matthew is apparently in love with Robert.

The film’s trailer was met with criticisms and different opinions, given its very complex storyline. Director Joel Lamangan, who helms the film, defends in an interview with PEP.ph that it is “not anti-gay” and that the story is based on a real story that happened in Lamangan’s province. The film is a co-production of 3:16 Media Network and Mentorque Productions.

“My Teacher” serves as the reunion project of Toni Gonzaga and Joey de Leon, who used to work in the noontime show “Eat Bulaga!” The film serves as a heartwarming tribute to teachers, with Gonzaga playing a teacher to de Leon, who is returning to school despite his age. Loisa Andalio, Ronnie Alonte, Pauline Mendoza, and Kych Minemoto also play important roles in the film.

“My Teacher” is directed by Paul Soriano and produced by Soriano and Gonzaga’s respective film outfits, Ten17P and Tincan.

Ian Veneracion and Heaven Peralejo play a couple in “Nanahimik Ang Gabi.” Veneracion is a corrupt police officer while Peralejo is his sugar baby. Their fun weekend is interrupted by an intruder (Mon Confiado) who tortures them.

In an interview during the film’s press conference, Veneracion reveals that Confiado almost got his finger fractured after Confiado accidentally stepped on it with his heavy boots. However, Veneracion was professional that he did not yell or disturb the scene to be cut. “Nanahimik Ang Gabi” is a thriller movie produced by Rein Entertainment and directed by Shugo Praico.

“Partners in Crime” stages the comeback of Vice Ganda in the MMFF. He plays Jack, a TV show host whose career is threatened by the entry of Barbara Rose, played by Ivana Alawi, who is out to dethrone Jack. Apparently, Rose is seeking revenge after Jack broke her heart when they were hosting partners in their province. Their competition becomes a collaboration when they had to solve a crime of a rich man.

The movie produced by Star Cinema is directed by Cathy Garcia-Molina. According to Alawi, it is a dream come true to headline a movie with Vice, whose films were top-grossers during MMFF.