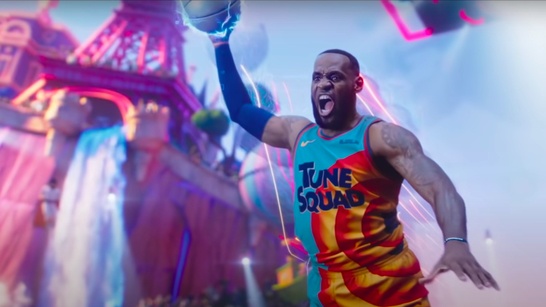 King James is back, and he’s set to dominate a different kind of basketball court!

In the first trailer of the new Space Jam: A New Legacy which dropped on Saturday, we get a first look at LeBron James’ new role: a dad-slash-baller who must play with a league consisting of Looney Tunes oddballs to save his son from a rogue A.I.

After getting sucked into a different digital dimension called the Serververse, LeBron James pairs up with Bugs Bunny to form a team that could beat the Goon Squad, a frightening team built by AI-G Rhythm (Don Cheadle), so James and his son can return to the real world.

Aside from James, several real-life NBA players also lend their basketball talents to the film — some of them even playing against James’ team as part of the Goon Squad! Anthony Davis, Damian Lillard, Klay Thompson, and WNBA superstar Diana Taurasi are all set to test the mettle of the Tune Squad.

Other basketball icons such as Kyrie Irving, Chris Paul, Draymond Green, Kyle Kuzma, as well as WNBA’s Nneka and Chiney Ogwumike are also set to tear up the hardcourt with cameo appearances.

On the cartoon side of things, you may have also spotted other Warner Bros. characters in the first trailer. Peep The Iron Giant, The Flintstones, Scooby-Doo and the gang, Yogi Bear and Boo-Boo Bear… and was that a dragon from The Game of Thrones? Yep, the movie is jam-packed with familiar faces, pun intended.

Space Jam: A New Legacy premieres in theaters and on HBO Max on July 16.