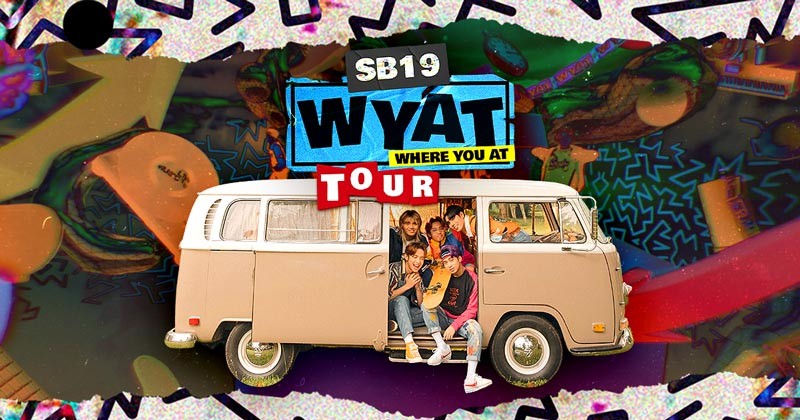 Josh, Justin, Ken, Pablo, and Stell are eager to reconnect with A’TIN worldwide!

Things keep getting better and better for P-Pop Kings SB19. The group, managed by Korean outfit ShowBT Entertainment, has been making waves. Most recently, they staged a huge comeback with a new single, “WYAT (Where You At),” which is also the name of their first-ever international tour. At a recent mediacon conducted at Novotel Manila in Araneta City, they gamely answered questions from the press and talked about the new era.

FreebieMNL got to catch up with ShowBT’s CEO Charles Kim (known to the SB19 fandom, affectionately, as “PopC”) just before the mediacon proper started. As expected, the man behind SB19 was beaming with pride and thrilled. “Everybody’s excited that we’re going out for the global tour. It’s the first time! Really exciting…I wish for a good result, of course!”

“WYAT” talks about the feeling of restlessness that everyone felt during the early days of the pandemic when strict lockdowns were in place. It was written by the group’s leader, Pablo Nase, along with his brother, Josue (also a talented musician in his own right).

The key visual of a cassette tape is symbolic in many ways. Even if Justin De Dios, who also directed the music video, is too young to have experienced it. “Nag-research po talaga ako. A lot of research, kasi di ko na naaubutan yun,” he says sheepishly. “Pero cool po talaga.”

Many people outside of SB19’s fandom (collectively known as A’TIN) will likely be surprised to find out that “WYAT” is not a brand-new song! They already performed it live during their last anniversary concert. However, the single that’s out now and kickstarting this new era is an upgraded, supercharged version.

“When we first performed ‘WYAT’ at our anniversary concert, [listening to it again] it felt bland!” Pablo laughs. “We want people to boogie, to dance. We had to re-record it because it was rushed. Hindi siya official audio. Nagkaroon kami ng time to breathe and step back. Nakita namin yung kulang, yung kailangan. Ayun, naproduce namin yung ‘WYAT.’”

Feeling connected again is the overarching theme of this period in their lives. Stell Ajero, who choreographed the dance moves, took the time to break down the hand gestures involved, especially the interlocked one; it’s rooted in the American Sign Language (ASL) symbol for “I love you.”

Part of this is preparation for their upcoming WYAT world tour, which had its kick-off concert in Araneta Coliseum on September 17. The Araneta concert sold out within 24 hours of the tickets being released; something SB19 was elated by. To give their very best, the members shared that they’re undergoing dance and vocal training, among other things.

The opportunities, Justin chimes in, have pushed the group to work even harder. “We’re coming out with a WYAT documentary—recording the album, this upcoming tour. All of it,” he confirms. “Para ipakita kung gaano kami talaga nagwwork hard sa craft namin.”

Following the Araneta kick-off concert, they will perform across the Philippines and then fly out for shows. As of press time, after the Kick-Off Concert in Araneta Coliseum, the WYAT tour’s confirmed stops so far include:

“And many more!” the boys emphasized upon announcing the dates. They also hinted at the possibility of a homecoming concert but were quick to say their key focus is the tour at hand and other possible dates and places.