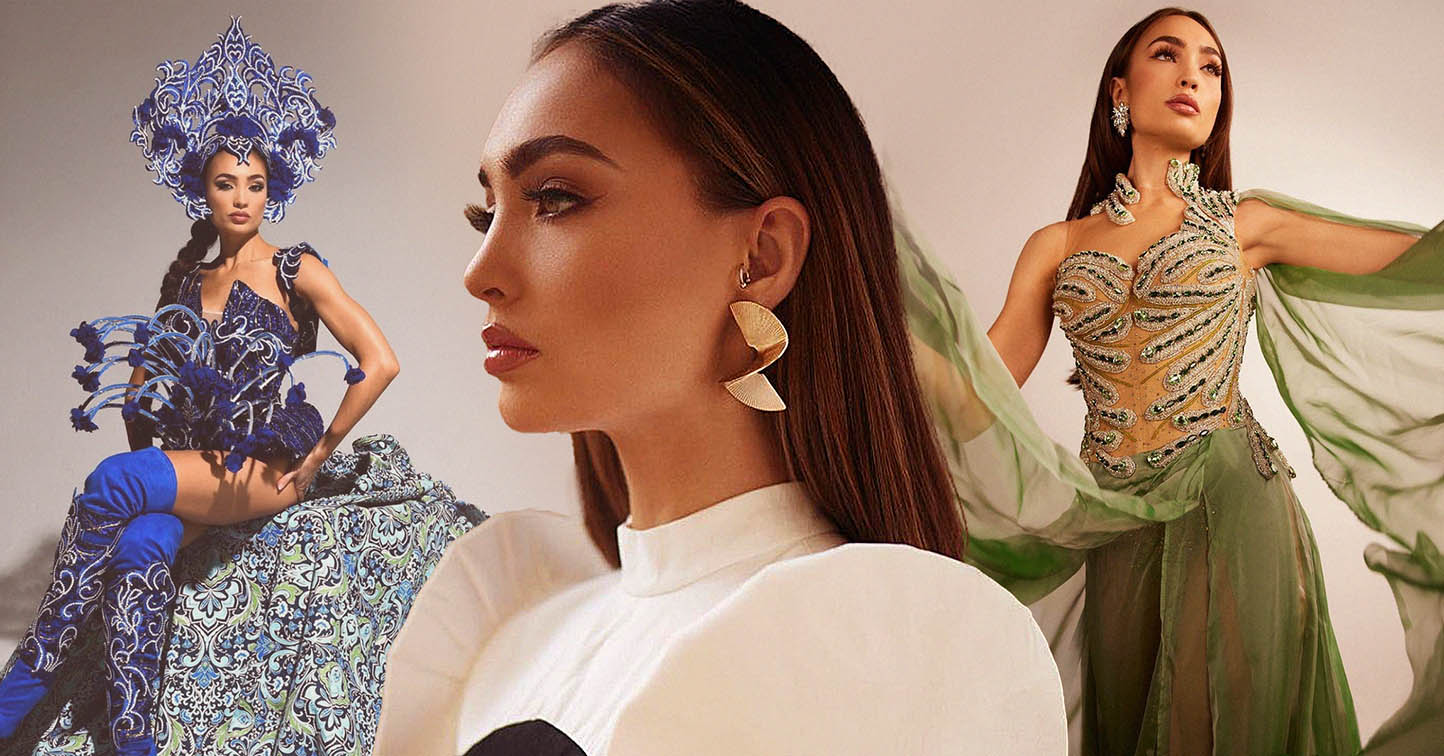 During the pageant, Gabriel wore her heritage on her sleeve—literally. A fashion designer by trade, she made her Miss USA interview outfit and documented the process on Instagram.

“I designed this to pay tribute to my parents,” she wrote. “I hand-painted the same flower design from my mother’s wedding dress onto my sleeves and tied it in a traditional Maria Clara Filipina collar shape.”

Gabriel is half-Filipino, half-Texan. Her father is from the Philippines. He came to the US on a college scholarship while her mother hails from Beaumont, Texas. Gabriel credits her multicultural upbringing with making her who she is today.

She’s the youngest (and only girl) of four children. Gabriel says her brothers were shocked when she went into pageantry because they saw her as a tomboy.

“As a fashion designer, I love fashion. But in my everyday life, I’m laid-back and relaxed because of my brothers. Growing up, I would shoot BB guns and skateboard with them, but I have a girly side, and pageantry brought it out,” she told CW39 Houston’s Sharron Melton in a previous interview.

How R’Bonney Gabriel got into pageantry

Gabriel started her pageant journey two years ago. She learned the ropes at Miss Academy, a pageant training school for girls aged 13 to 27. It’s similar to the Philippines’ Aces & Queens and Kagandahang Flores beauty camps. A friend suggested she join a pageant, but Gabriel brushed off that idea because she felt she had too much on her plate already. But she changed her mind after thinking about it.

“I was like, ‘I’m too busy,’ but then I started researching beauty queens. I realized they’re beautiful, carry themselves well, speak well, and most importantly, advocate for what they care about.”

Gabriel owns an eco-friendly clothing brand called R’Bonney Nola, which specializes in handmade pieces made from recyclable materials. She’s very passionate about what she does, and one of her biggest goals is to show people that fashion can be eco-friendly and sustainable without sacrificing style.

She touched on it during the Miss USA coronation night interview round. When judge Soo Yeon Lee asked her what she would about climate change and its impact on women, she brought down the house with her answer.

Fast-forward to the 3:24 mark to see what she said!

What’s next for her

Gabriel is the oldest Miss USA titleholder at 28 years, six months, and 13 days. She’s the first Asian-American to win the title since Brook Lee in 1997. The last time a Filipino was named Miss USA was in 1962 when Macel Wilson became Miss USA.

Gabriel is also the first Filipino to win the Miss Texas pageant. Earlier this year, she said being a trailblazer makes her “extremely proud” and that she hopes others will follow in her footsteps.

“I think it’s so powerful to be the first person. It’s a big responsibility too. I love that I can represent Filipinos. I hope other Asian women can be inspired to join pageantry or any other field they may not see themselves in at first.”

This year was a big one for Filipinos at Miss USA. Aside from Gabriel, two other Filipinas represented their respective states that night: Hawaii’s Kiana Yamat and New Mexico’s Suzanne Perez. Perez even made it to the Top 12 alongside Gabriel.