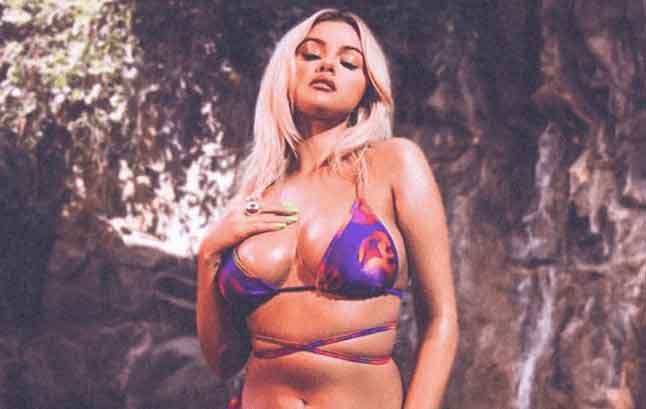 Selena Gomez earned praise around the web for her recently released bikini pictures, with her body untouched and unedited.

A couple days ago, the singer/actress shared one of many swimsuit photos she took for the swimwear brand, La’Mariette, on her Instagram account. Pictured with a high pony and a bright purple one-piece, Gomez said, “So grateful that I get the opportunity to celebrate my friends’ endeavors. My collaboration with @lamariette is out today!”

She wrote, “What I love about this brand is that it celebrates women who love their bodies unconditionally giving themselves the grace they deserve. Hope you love it as much as I do.”

On the La’Mariette Instagram account, more photos of Gomez in tie-dye swimwear were posted. She could be seen sporting a wrap-around bikini near a rock waterfall, looking cool and confident.

The photos received much love online, mostly because Gomez chose not to retouch, edit, or Photoshop her body in the pictures. The decision, according to many social media users, promoted body-positivity, self-confidence, and self-love.

One user called the songstress “100% real” and called on others to appreciate her effort for sending a “positive message” about bodies.

Another thanked her on behalf of girls with body image issues and proclaimed, “You are beautiful.”

The hazy purple tie-dye print is called “Aura” and was specifically inspired by Gomez herself, who, according to co-founder Morgan Brutocao, “shines through in everything she does.”

La’Mariette touts itself as a brand that is “all about inclusivity, body positivity and celebrating the fact that all bodies are beautiful.” You can catch the new swimwear pieces on La’Mariette’s website now.