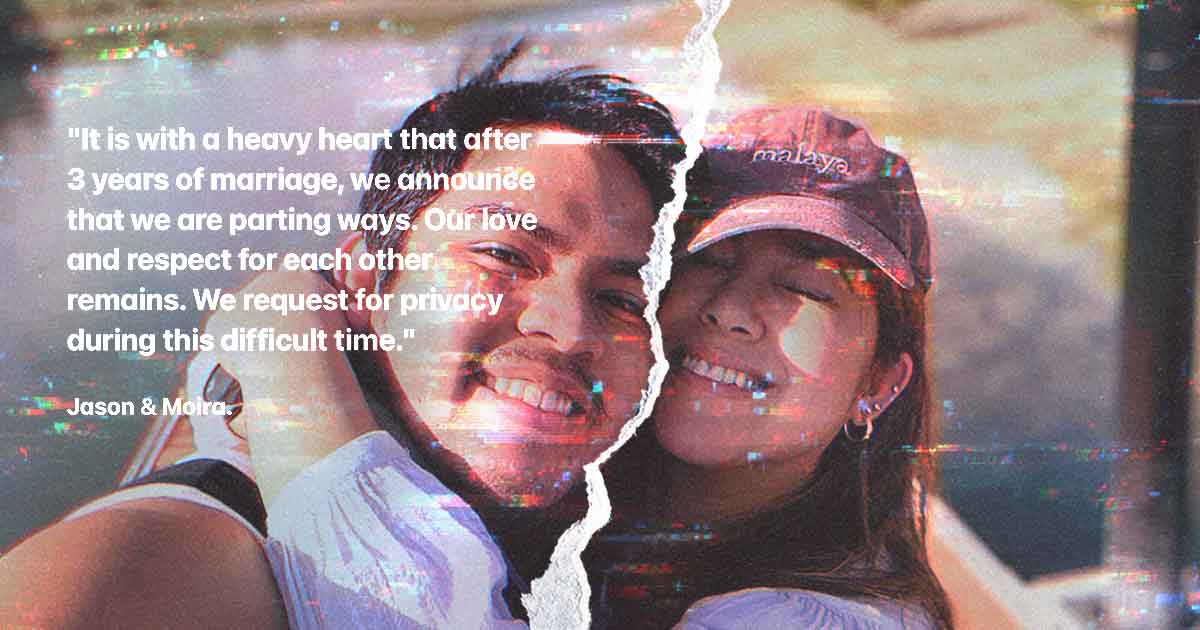 Jason Hernandez’s infidelity has us asking if love is even real anymore.

After three years, Jason Hernandez announced that it’s over between him and Moira Dela Torre.

We were all shocked to hear about their separation. After all, they made us believe in love. Their interviews, their music, their social media posts–all of that inspired us.

We watched their relationship evolve. They started out as best friends, became lovers in 2017, and got married in 2019. It hurts to see what they had end like this. All the bliss ended in a rocky finish.

Jason spilled the tea in separate posts on Facebook and Instagram that got the attention of fans in an instant.

In the caption, he wrote, “I married my best friend (sic) with the intent of spending the rest of my life with her. Though my love for her has always been genuine, a few months ago, I confessed to Moira that I have been unfaithful to her during our marriage. I believe that she deserved to know the truth rather than continue down a ‘peaceful’ but dishonest path. I take full responsibility and I’m doing my best to be better.”

Quite the scandal, no? The most you can do is appreciate his honesty.

Anyway, you read that right. Jason Hernandez was unfaithful to the esteemed songstress. Regardless of who he cheated with, it’s disappointing to hear that someone like him would do such a thing.

“Moira” is the top Trending Topic on Twitter as of now. Netizens did not hold back on this issue.

What really hurts the most is the fact that Jason knew what Moira had gone through. Fck cheaters!

i don’t understaaand. if jason genuinely loved moira, why did he become unfaithful to her and their relationship? why did he cheat? kasi for me, if u genuinely love the person, despite anything, i wouldn’t cheat. i would talk it out to them and have it fixed.

It’s almost hard to believe that Jesus was at the center of their relationship, as they often said in the past. This goes to show that when you’re in love, you have two choices. You can choose to be loyal, or you can choose to cheat.

Let’s all wish Moira the healing she needs.