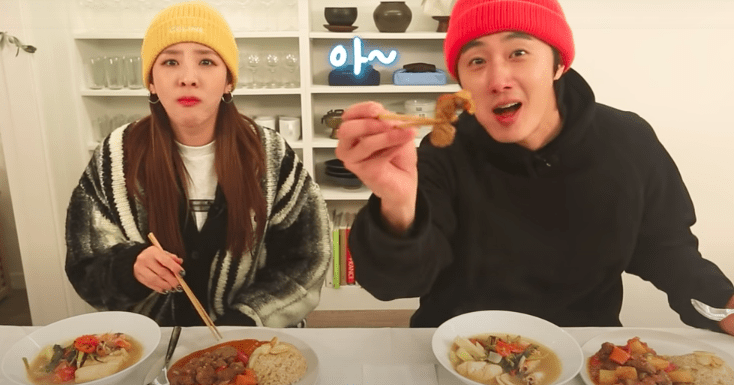 Having lived in the Philippines for several years, it comes as no surprise that K-Pop idol Sandara Park loves Filipino food. But since she hasn’t been to the country for quite some time now, it’s understandable how much Dara (also known as the Pambansang Krung-Krung ng Pilipinas) misses her favorite Filipino dishes.Â

Thankfully, her good friend – South Korean actor Jung Il-woo – satisfied her cravings by cooking two of her favorite Filipino dishes: kaldereta and seafood sinigang. But since Il-woo hasn’t been to the Philippines before, the former cast member of the variety show “Fun-Staurant” tried to learn Dara’s favorite dishes by looking them up online, watching one YouTube video after another.Â

“I’ll be cooking some Filipino foods for Dara. I’ve actually never been to the Philippines before,” Il-woo began.

“I’ve never been there, but I tried my best to search information on YouTube. I also looked everywhere up for the Favorite Filipino menus of Dara,” the “Sweet Munchies” actor added.Â

Upon finding out the dishes Il-woo would be cooking for her, Dara said: “Sinigang is my favorite. It’s my favorite menu out of all Filipino foods, and I never had my meals without it.”

Admitting she didn’t expect someone would make sinigang for her in Korea, Dara told Il-woo: “It’s simple but I don’t know how to make it. I mean … who is going to cook Filipino food for me in Korea?”

As soon as Il-woo finished cooking, the two sat together at the table for the final judgment.

“This sinigang is pretty good, too. It kinda feels like I’m having the clear fish soup,” Il-woo told Dara.

Towards the end of the vlog, Dara told Il-woo how happy she was to have spent the day with him trying out Filipino food: “It just feels like I came here to make great memories.”

Dara had a successful career in the Philippines from the early to mid-2000s that started following her stint in the reality talent search “Star Circle Quest.”

Apart from top-billing movies and TV shows, Park also released an album in the Philippines, which includes her hit “In or Out.”Â

After a successful career in the Philippines, Park left for South Korea and eventually debuted as part of the girl group 2NE1.

Il-woo, on the other hand, is known for his roles in dramas such as “Moon Embracing The Sun” and “Cinderella with Four Knights.”

Il-woo, who considers Dara as one of his closest female friends, got to work the latter in “The Return of Iljimae.”