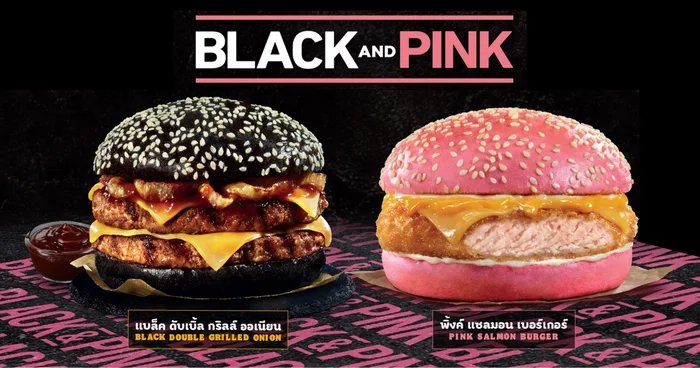 This one’s for all the Blinks out there.

In light of the month of love, Burger King Thailand has revealed limited-edition “Black and Pink” (literally, black and pink) burgers as part of their menu.

With no endorsement or official partnership with superstar South Korean girl group Blackpink, Burger King has capitalized on the millions of Blinks (or Blackpink fans) around the world by including the two new burgers in their lineup.

The “Black” burger for singles, or the Black Double Grilled Onion Burger, is packed with two slices of melted cheese and grilled onions atop two flame-broiled burger patties and special sauce, all wrapped in a pretty package of a black-colored bun.

The “Pink” burger for lovers, or the Pink Salmon Burger, features a deep-fried breaded salmon fillet with melted cheese, another special sauce, and a pink-colored burger bun.

“BP FOREVER” and “Blackpink in your area” are some of the dozens of comments proclaiming love for Blackpink. The promo video posted on the BK Thailand account has garnered more than 5,000 views.

Interestingly enough, Thai native Lisa Manoban, one of the four members of Blackpink along with Jennie Kim, Jisoo Kim, and RosÃ© Park, is one of the most recognizable celebrities in Thailand.

Manoban was born and raised in Thailand before eventually moving to South Korea in 2011 to train under YG Entertainment and join soon-to-be K-pop girl group Blackpink.

Now, legions of Lisa fans have staked their claim in Thailand and vehemently supported anything Blackpink related. That being said, Burger King can be sure that these Blackpink-themed burgers will be a hit.

You can catch the two new items from February 2 to February 28, at select Burger King locations in Thailand.