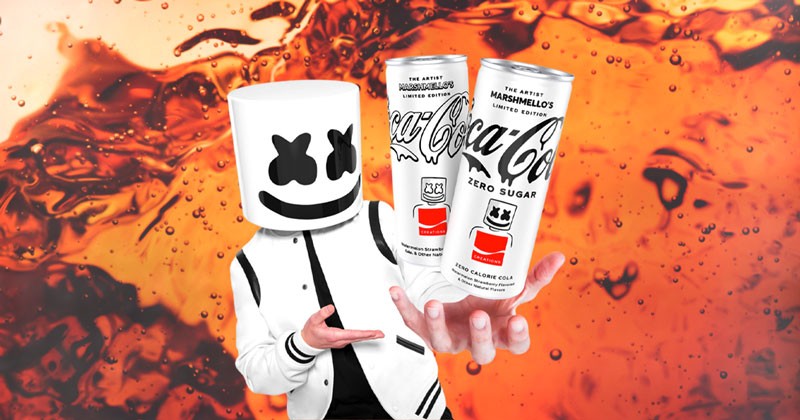 Coca-Cola Creations is dropping a remix for its newest limited-edition flavor. And, for the first time ever, the brand is collaborating with an artist – Marshmello. His take on the drink bottles the feeling of mixing chart-topping hits in a limited edition drop.

“It was great to collaborate with Coca-Cola on this limited-edition drop,” said Marshmello. “We created a vibey blend of my favorite flavors in this all-new mix. I think it tastes amazing and I hope fans love it too.”

One would think that Marshmello’s Limited Edition Coca-Cola was marshmallow-flavored. I know I did. But like the epic drops that fill his sets, the drink’s magic is in the unexpected. His spin on Coca-Cola is a fusion of his favorite flavors, strawberry and watermelon. If anything, it tastes like you’re eating gummy bears while drinking a glass of Coke.

“Music – just like Coca-Cola – has such an amazing power in connecting communities and creating opportunities for shared experiences,” said Teejae Sonza, Marketing Director for Trademark Coca-Cola of the Coca-Cola ASEAN & South Pacific operating unit. “For this second Coca-Cola Creations drop we are doing here in ASEAN & South Pacific, we sought to add an unexpected remix of flavors to a great Coca-Cola taste, and Marshmello is the perfect collaborator,” she further added. “It is an exciting step for our brand to introduce Marshmello’s Limited Edition Coca-Cola and invite fans to immerse themselves in Mello’s world.”

More about the Marshmello collaboration

Marshmello’s collaboration with Coca-Cola invites fans to experience the Melloverse for themselves. Fans know his desire to have a positive impact on culture through his music and everything else he does. And this collaboration is no different.

Marshmello invites fans to scan the QR code on the can. This leads to the Coca-Cola Creations online hub where they can enjoy several different digital experiences.

Marshmello’s Limited Edition Coca-Cola is also available to buy in a case of 24 Zero Sugar 320ml cans. And it won’t be a Marshmello collab if it didn’t have his signature aesthetic. Coca-cola gets rid of its signature red in favor of black and white visuals and dripped Spencerian script. It’s a total melding of brands into a smooth and satisfying vibe. Coca-Cola partnered with Forpeople on the packaging design.