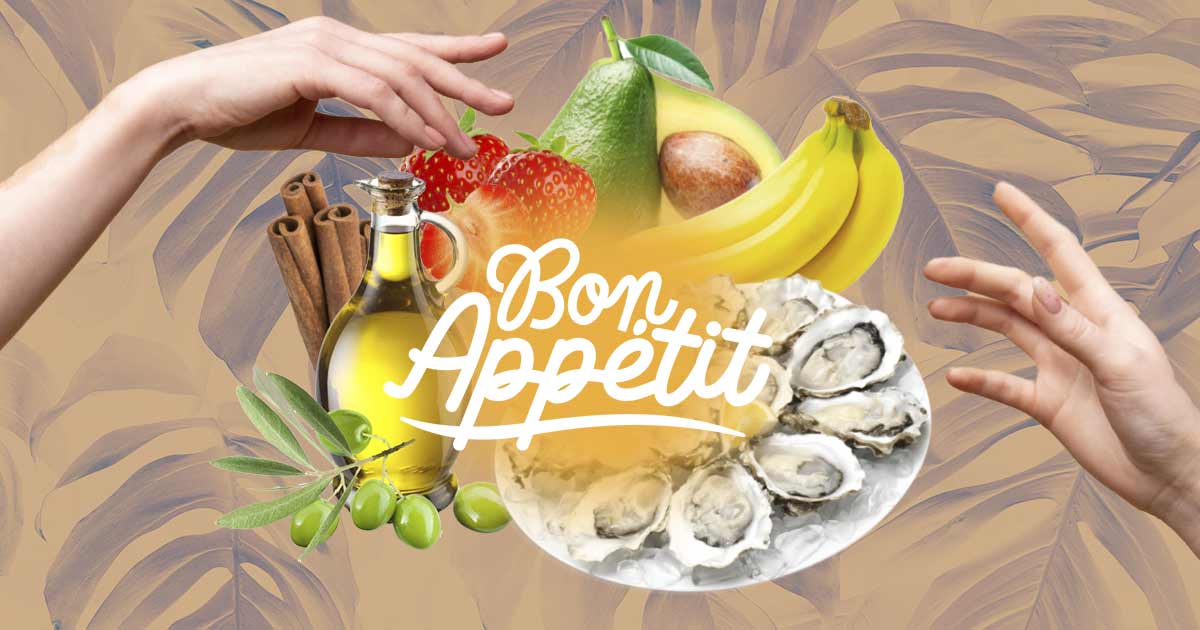 Bone Appétit: Here’s What You Should Eat If You Want To Heat Things Up

Aphrodisiacs are real, and they’ve existed for a long time now.

Ever since mankind existed, aphrodisiacs have been around. Each culture has its own kind of aphrodisiac. To give a brief definition, aphrodisiacs are food, drinks, and medicines. People eat them to enhance or increase their sexual appetite. Aphrodisiacs are also said to increase pleasure for females.

For this story, my husband and I ate food considered aphrodisiacs. We had to eat them and have sex afterward. From a long list of aphrodisiacs, we chose five that were available to us.

My husband is a huge fan of chocolates. I bought a bag of Hershey’s Kisses at Landers for P200, and we each had five pieces. I also had chocolate ice cream beforehand. Chocolate has phenylethylamine and serotonin, which are mild sexual stimulants and mood boosters. Eating chocolate makes you feel good, even euphoric. That could be why when we had sex, it was explosive.

The Greeks wrote about asparagus in their love poems and the Kama Sutra advised drinking it as a paste. The aspartic acid found in asparagus neutralizes excess ammonia in our bodies. For the uninitiated, excess ammonia can lead to fatigue and sexual disinterest. My husband and I took all that into account and decided to try it for ourselves.

I looked for asparagus all over the metro because I was craving the grilled ones. I finally found a bag at Shopwise for P300. We ate three sticks each (after steaming them, of course). We waited for the effect to kick in, but there was none. All it did was make us thirsty. We had sex anyway, but it wasn’t extraordinary. Strange.

Strawberries were once known as a symbol of Venus, the Roman goddess of love. A trip to Vertis North’s Farmers Bazaar had us buying strawberries. 1/4 of a kilo cost P400, but they were big, ripe, and very juicy. We didn’t dip them in chocolate before eating, so as not to spoil the flavor. Instead, we consumed them as they were. When we kissed, the flavor remained on our lips, and we ended up having sensual sex. It wasn’t so much the effect on our bodies that made for an intense sexual experience. It was the flavor.

I bought P10 worth of ginger at Commonwealth Market. I brewed it a bit and we drank the juice. As usual, we waited for a few hours for it to take effect, but we only fell asleep without so much as a kiss.

Avocados have nutrients that are essential to sexual health. These nutrients include beta carotene and magnesium. Avocados also have vitamin E, aka “the sex vitamin.” Together, these nutrients promote a fulfilling sex life.

Based on personal experience, not every so-called aphrodisiac actually enhances your sex drive. Some of them work, but others leave you wanting. The best approach to aphrodisiacs is to eat them without any expectations. If they work for you, great. If not, move on and try something else.

RELATED The Naked Truth: A Telegram Sex Worker Tells All