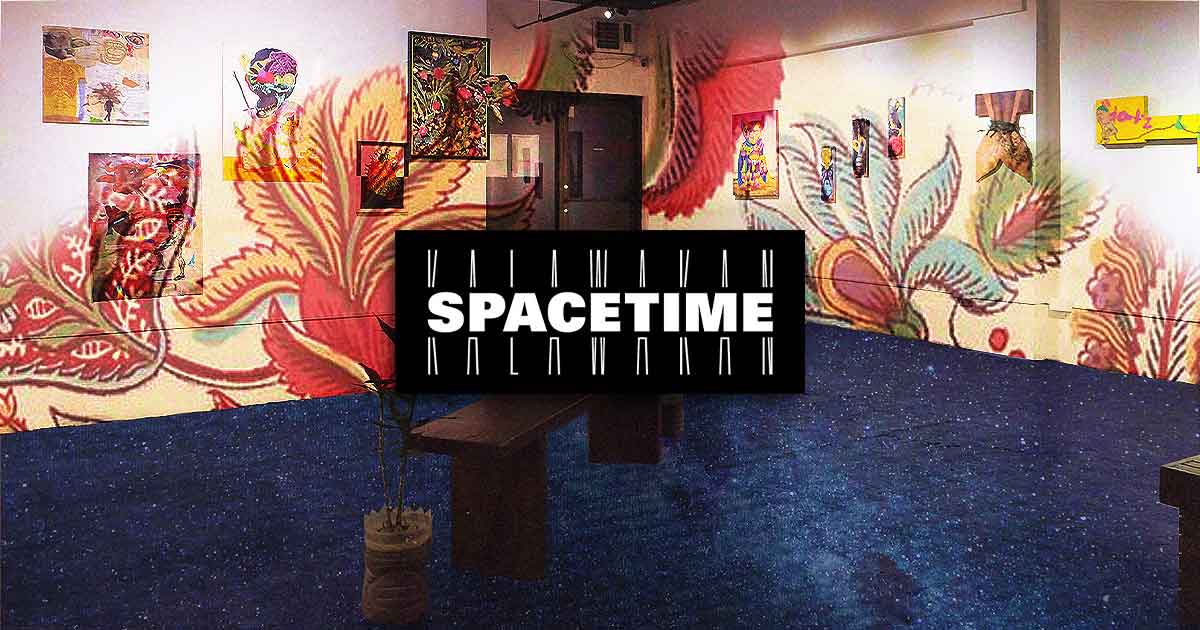 Step into the fractal as this do-it-yourself gallery reopens its doors for aficionados.

A new moon spotlights the shady Quezon Avenue for a present tense pandemic Friday night. Not because of the street hailers it is prominent of but with a wide spectrum of shapes, hues, and sound as KalawakanSpacetime gallery once again opened their doors for sound and visual artists.

For their intention with this kick off they said that it is “An exhibition of flower offerings and prayerful intentions for everyone who have lost loved ones and important things in the last two years. All for hope to thrive”

Step into the fractal, as owner Gabe Naguiat, and his partner Jan Sunday for a behind the scene of their art space.

Visual artist Jose Gabriel “Gabe” Naguiat, whose artistic practice is rooted in graffiti and urban art, drew inspiration from a book he read during the lockdown of 2020. According to him the book is an Eckart Thole’s classic called A New Earth. He also said that the book awakened him to create his own visual representation of a flower. Along with him sitting was her partner, Jan Sunday.  Known in Cebu and the punk music scene she is  also known as the lead vocalist of the band Tiger Pussy.

“It was the start of the lockdown and it seemed like the world was ending. I pulled out this book from my brother’s shelf with a hopeful name: “A New Earth” by Eckhart Tolle. The evocation spoke about the emergence of flowers and how they later played an essential role in the evolution of consciousness by providing inspiration to countless artists, poets, and mystics. This deepened my appreciation for flowers and their potential to represent profound and varied significance to its observer. Later, when the time felt right to reopen KalawakanSpacetime, Jan and I thought it made perfect sense for the flower to be the subject to symbolize the blossoming of the new space — and hopefully the emergence of ‘A New Earth.”

Checkout the artist line up here:

The space where KalawakanSpacetime resides was a unit that hadn’t been rented out in half a decade. It served as an extra storage space for the other tenants in the building. Prior to this, it had also been a rehearsal studio for dancers and entertainers who were trained and sent to Japan in the 80’s. Naguiat and his friends saw the potential of the space to be a venue to hold exhibits for artists in the fringes of the art scene. The first official exhibit opened with a solo show by graffiti artist Art Tavera entitled “Ruin Everything.” Since then, the space has hosted events and exhibits for creatives emerging from various underground counterculture movements.

Just like any collective endeavor wanting to thrive, KalawakanSpacetime also had their share of struggles when the drastic lockdown happened. This includes canceling scheduled exhibits and events. There were several attempts to jumpstart activity in the space but the restrictions made it impossible for any movement to gain momentum. This hiatus however, gave everyone the much needed space and time to focus on their own personal projects and creative explorations.

Empathizing with all the artists who have their own creative blockage, Gabe also said that there are a lot of mishaps like having self-battles telling himself that, “maybe I should not do this anymore.” However, as for the silver lining, there were also triumphs like applying for a grant for Parasite Hong Kong, and being able to be a part of it.

This kind of victory as Jan Sunday says it, are the ones that keep them going even though the gallery was not enough to sustain them monetarily.

When asked about scene gatekeepers Gabe simply said that “Most of them are pretty cynical with the scene. He also added that these guys are way older and are talking from a different time, space, and perspective. Trying to compare the old ways with the new ones, he said that the gatekeeping scene has been flatten out and that the overall consciousness of the art movement has already evolved. Noting that the people behind the scene these days are not stuck with hierarchy anymore.

Although I’ve shared my fair opinion on this, that perspective was most likely an opinion formed from experiences in the past. We’ve all been through a very tough couple of years and I’d like to hope that people are more excited about the possibilities of the future than holding on to rigid structures of the past. He added.

Apart from being the curators of KalawakanSpacetime gallery, Gabe Naguiat and Jan Sunday are also full time visual artists. Even though they say that they are focusing on the platform, Sunday also emphasized that the goal is to provide a channel for artists to be seen.

We are both full time visual artists. We do not advise it to anyone. Our percentage with the artworks are very minimal. We explain to the artists that this is about giving artists their platforms. Giving people to be themselves. A lot of the artists want to be seen, right?… Even us, we’ve been through that. As an artist and as a person.”