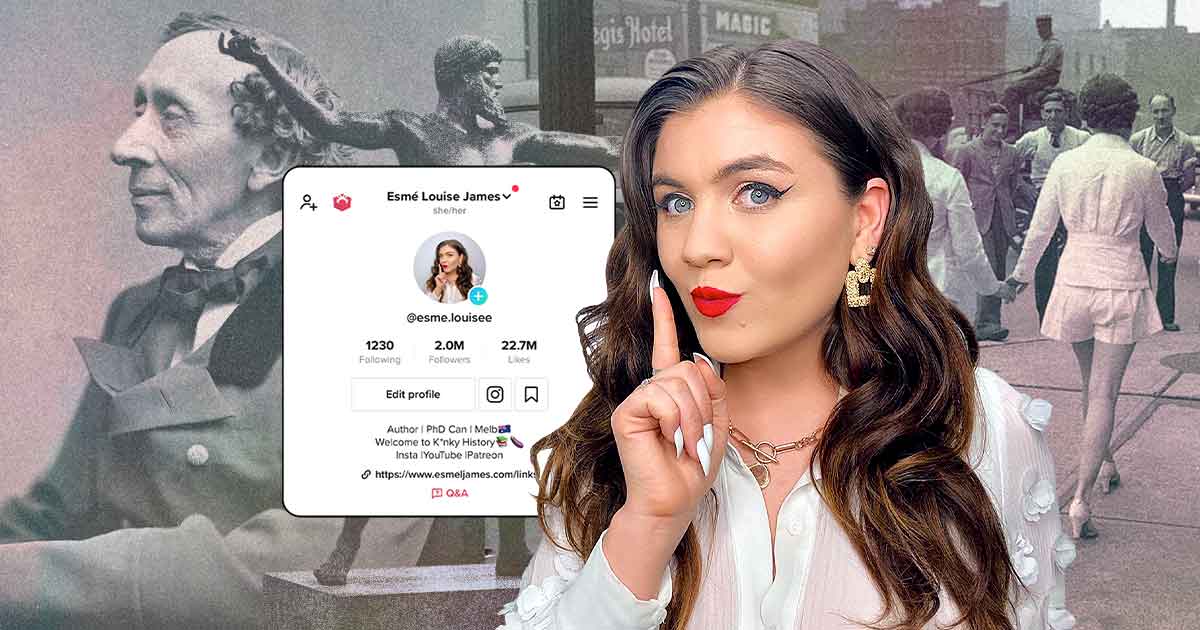 There’s a TikTok account recounting sex tales from the past, and it has over 2.1 million followers.

Esmé Louise James is an author and a Ph.D. candidate. Based in Melbourne, Australia, Esmé talks about sex in a very candid way. She created Kinky History in 2020 and has since amassed millions of followers.

Esmé aims to make sex less of a taboo topic via her TikTok account, where she talks about its history. She shares sordid details about ancient sex toys and aphrodisiacs. Esmé also tells stories about sex in different cultures.

Kinky History as an educational medium

Esmé decided to create her channel in October 2020, when the pandemic was well underway. No, it’s not what you think. She did not create it out of boredom.

Kinky History actually started as an online lecture series. Esmé, as the host, delves into the history and evolution of human sexuality. Her channel is a treasure trove of scandals and secrets related to sex.

For example, Esmé talks about how the broomstick was actually a sex toy. Women used to polish the handles of their brooms and use them for sexual pleasure. This gave birth to the idea that witches ride broomsticks. That idea became popular even among scholars.

But Esmé decided to tell the real story. She wanted to educate people using her TikTok account. Esmé wants knowledge to be accessible to all. By discussing sex in an educational yet entertaining way, she’s erasing taboos one video at a time.

Esmé has since branched out to talk about sex statistics in Australia. She has gone on to create a mini-docuseries with her mother, Dr. Susan James. They talk about the numbers that have to do with gender, identity, and sexuality in Australia.

The mother-daughter tandem goes on adventures, where they delve into Australia’s sexual culture. It’s exclusive to watch on TikTok, and people are very appreciative of the initiative.

Kinky History is still ongoing, with Esmé continuing to dole out facts about the history of sex. Not only that, but she also talks openly about gender and sexuality. She talked about how it was normal for older men in ancient Rome to have sexual relations with younger men. She’s trying to normalize age gaps in relationships as well as homosexuality.

She now has an OnlyFans account, where she goes into greater detail. Esmé shares facts on her OnlyFans page that she can’t on TikTok. She calls it Kinky History: Uncensored.

RELATED The Naked Truth: A Telegram Sex Worker Tells All

Her OnlyFans page is now in the top 0.5% of content creators, which is a feat in itself. Esmé James has given people the space to connect with one another, all while learning about the history of sex.