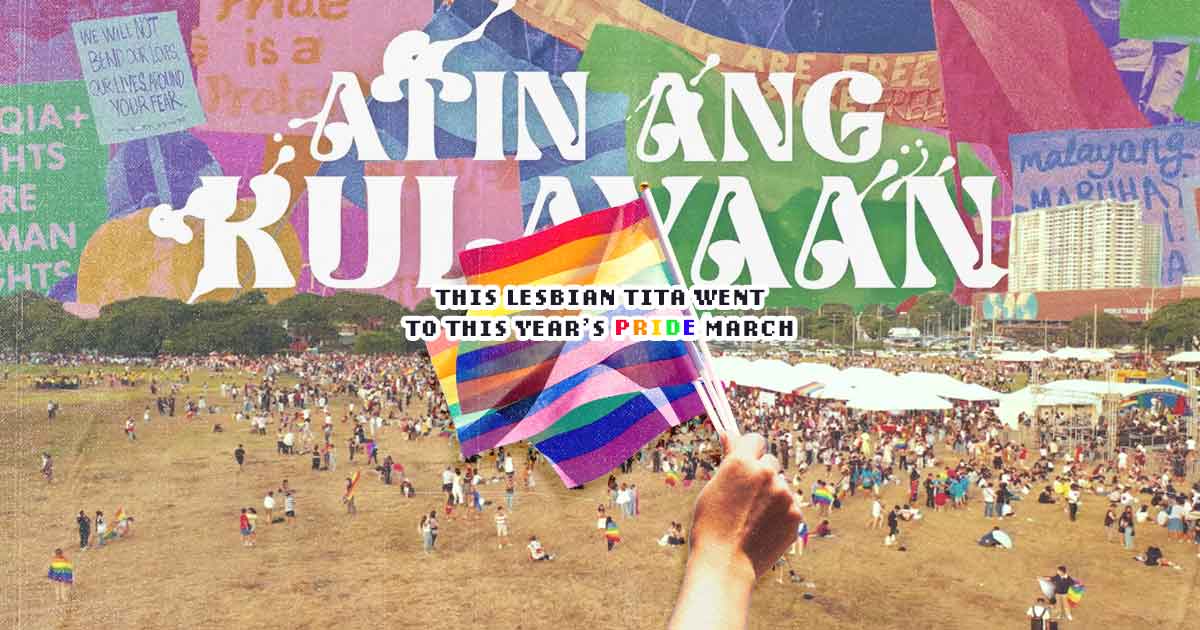 What Happened When This Lesbian Tita Went To Pride March 2022

I’m always chided for being such a tita. A lesbian tita, to be exact. At 30, my back always hurts, and I can’t stand for extended periods anymore. I gave up alcohol, and my go-to hot beverages are coffee and tea.

I went to Pride March with my husband last June 25. We came from an all-nighter at his office, and we only had about four hours of sleep. Here’s what went down.

The event was at the CCP Open Grounds, right beside Star City. We arrived at exactly 4:00 PM when the march was set to start. Since nothing was happening yet, we looked for FFTG Cafe’s booth so we could hang out with the people there.

I was a little frustrated that there weren’t any seats because my back already hurt. I decided to roam around and take pictures while waiting for the march to start. My husband and his friends trooped to the smoking area which was kind of far from the booth. Since I wanted to sit for a while, I went with them.

While we were smoking, the announcer said that the march was about to start. The crowd gathered and fell in line, and I had to scramble to get to the front. The march went on for two whole blocks. It had only just begun when my feet started screaming, but I soldiered on.

What this lesbian tita heard and saw

Several groups joined the march, including Youth Works PH, Spectrum, and Bahaghari. There were protest groups such as Anakbayan and Kabataan Partylist. Aside from advocating for LGBTQ+ rights, they also railed against social injustices.

For those who didn’t come with friends, the organizers created PrideKada. There were street dancers who threw rainbow flags in the air while performing. The Kakampink spirit was also strong at the event. People carried pink accessories and shouted former VP Leni Robredo’s name. Some people carried Bluetooth speakers and played Lady Gaga songs. Others joined the chanting for the passing of the SOGIE bill.

The crowd was a healthy mix of fashion-forward and practical. Some wore gowns and colorful outfits; others wore sensible shoes and regular clothes. Many marched to the beat of their own drum. They wore wings made from balloons. One even came in a tulle overcoat with My Little Pony stuffed toys stuck to her chest. A lot of people wore different kinds of Pride flags as capes.

When the people marching got back to the grounds, I didn’t stop and sit. Instead, I roamed around to look for friends and take more pictures.

My husband decided to stay back and chill with his fellow trans men. Some of them were from the dance group TFX, and others were people he met while marching. I saw a lot of proposals and several moms offering free hugs. There were a few pastors who offered blessings to couples, individuals, and pets. There were famous speakers like Chef Giney Villar and Teddy Baguilat. Groups like the Lesbian Alliance Movement, MPH, and UP Babaylan gave speeches as well.

There were drag queens, spoken word artists, singers, and dancers. Cheryl Salvador, who is part of Words Anonymous, performed a moving piece about loving a girl. TFX, a dance group made up of transmen and lesbians, also performed.

Final thoughts from this lesbian tita

Pride March ended late at night. At around 11:00 PM, my husband and I were already walking back to Harbour Square where we parked our car. We were so ready to head home and tumble into bed.

As tiring as it was, Pride March 2022 was one for the books. Our bodies were dead-tired, but our hearts were full and our spirits were high. We swore to make Pride a tradition.

RELATED It’s Not A Party, It’s A Protest: The True Origin Of Pride Month

Since I’m a tita, I’ll need to start preparing for next year as early as possible. I’ll need all the energy I can get!