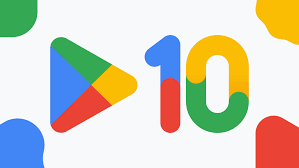 Google Play received a new logo on July 25 to celebrate its 10th anniversary. To describe the changes, Google changed the shape of the logo a bit. But, the less vibrant tone of its colorway is the most noticeable difference. Its colors now match the red, green, blue, and yellow that Google uses for its other services.

Tian Lim, VP of Google Play, explains, “We’re introducing a new logo that better reflects the magic of Google. It also matches the branding shared by many of our products—Assistant, Gmail, and more.”

The revamped logo marks the 10th year of Google Play’s rebranding from the Android Market in 2012.

The tweaking of the app’s logo isn’t in celebration of its anniversary. It’s also for the massive user count it gained throughout the decade. “A decade later, more than 2.5 billion people in over 190 countries use the app every month. With it, they discover apps, games, and digital content,” says Lim.

Lim says over two million developers use Google to build their businesses.

In celebration of its anniversary, Google is offering a Google Play Points boost! Activating this will let you earn up to 10x more points on purchases. This promo includes most in-app purchases too.

Let us all wish Google Play a happy birthday! May the app provide users with more sales and discounts.