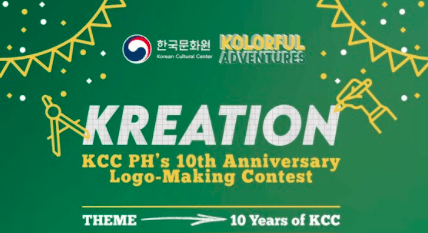 As the Korean Cultural Center in the Philippines (KCC) marks its 10th anniversary this March, lots of exciting stuff – which includes informative content, fun contests, and huge prizes – await fans in the coming weeks.

Speaking of prizes, KCC – in its hopes to foster active participation among Filipinos throughout the celebration – launched a logo-making contest where the winner will take home a whopping 40,000 pesos in cash as well as the opportunity to take part in the momentous occasion.

Yep, the chosen logo will be incorporated in various promotional and event materials to be used in the anniversary celebration including the video slated to be released this coming July.

Dubbed “Kreation: KCC PH’s 10th Anniversary Logo-making Contest,” the event aims to put the creativity of Filipinos in the spotlight while showcasing their love for K-culture at the same time.

Earlier this month, KCC also kicked off several events to mark its Kolorful Adventures in an attempt to bring Korean culture closer to the new generation.

Among them being “K-Dance Power Up” K-Pop Dancing Diva Dasuri Choice took on the KCC dancing stage where she did online dance tutorials for highly-requested songs on its social media pages. These include EXO’s “Obsession,” TWICE’s “I Can’t Stop Me,” and IU’s “Celebrity.”

Lucky participants who will get randomly selected will get a once-in-a-lifetime opportunity to participate in Dasuri Choi’s exclusive dance clinic. But those who wouldn’t make it can still get the chance to win prizes through a quiz version of the K-Dance Power Up!