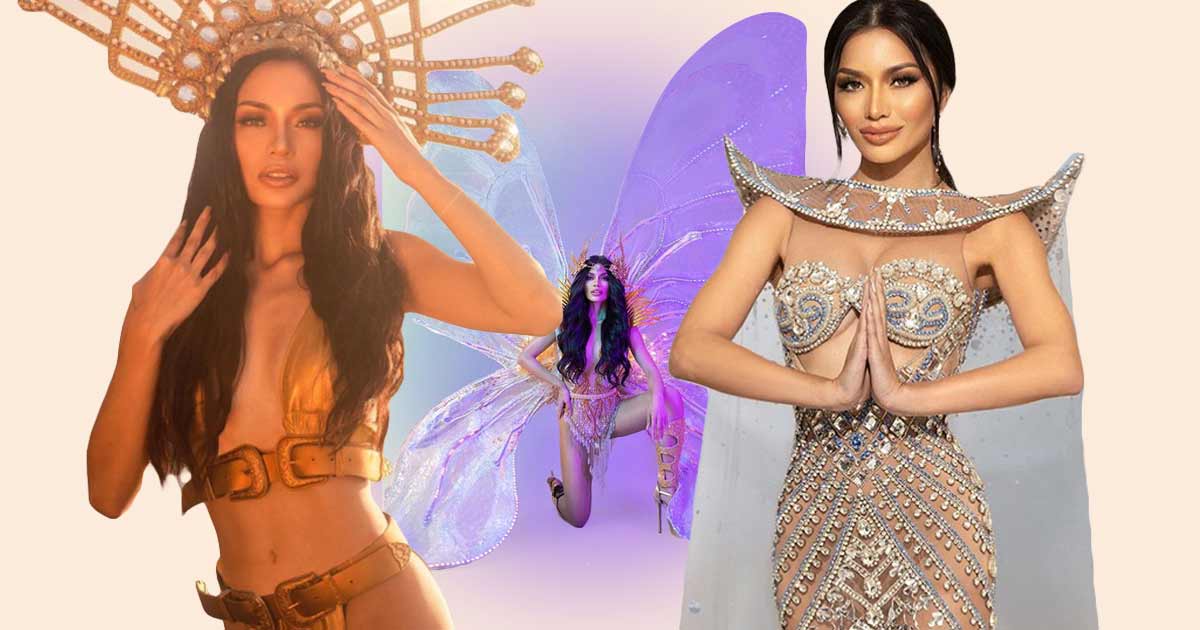 Though her journey to the Miss Grand International crown was cut short — in surprising fashion no less — Samantha Alexandra Panlilio will still live on in the minds of pageant fans as one of the strongest contenders the Philippines has ever had.

It’s difficult to debate otherwise — the momentum that the beloved “SamPan” mounted up until the pageant’s preliminaries was enough to convince the audience that she has a solid shot at the crown. Take a gander at Panlilio’s most jaw-dropping pictorials to understand why people wept when she bowed out of the MGI too soon.

Perhaps the most picture-perfect moment during the preliminaries was when SamPan left mouths agape with her bespoke sheer cape gown painstakingly crafted by designer Rian Fernandez.

Wearing a sparkling, gem-encrusted gown, SamPan sashayed down the runway before dramatically dropping the gleaming gossamer cape which Fernandez embroidered himself.

Dubbed the “Layag Balangay,” the ensemble draws inspiration from the “seafaring vessel of the Philippines being the first wooden watercraft excavated in Southeast Asia.”

Fernandez elaborated more on the gown on Instagram: “The bodice is fully bejeweled with Caribbean Blue opal rhinestones, glass beads, and oversized Swarovski crystals. This piece is a perfect way to reawaken Filipino pride in a forgotten heritage of ancient Filipino ingenuity.”

A sizzling poi dance in a swimsuit

Also during the preliminaries, the MGI contestants wowed with their printed mint-blue maillots on stage as well as with their bright-yellow two-piece swimsuits while strutting on the dockside.

What made SamPan stand out under the sizzling midday sun is the video package she posted just hours before the competition, featuring her fiery and frivolous island living.

Whether diving deep into the sea or spinning flame-lit pois, SamPan looked like a goddess, and even more so when she donned an elegant golden headpiece while the camera gives into her sultry stares.

“During these past weeks, I have learned many things. Among them is grit and gratitude,” SamPan said in the caption. “I am an artwork, an expression of all my supporters, mentors and creatives. Thank you to all of you for making our journey come to life. The memories and experiences I have gained competing at Miss Grand International have also forever changed me as a woman.”

“I have come to discover the power within me and what it means to be a Filipina,” ended SamPan, who, for her sexy swagger, made it to the top 5 best in swimsuits through popular vote.

An ode to the Paruparo Festival

And who could forget the fluttering charm that SamPan served during the National Costume portion of the pageant?

Designed by Louis Pangilinan, the extravagant butterfly-themed ensemble consisted of a gold hand-beaded bodysuit, enormous, glittery white wings, and an ornate headdress which were both made by Santino Rivera. She also wore a pair of elaborately-crafted gilded heels crafted by none other than Jojo Bragais.

SamPan’s stylish national suit, which was inspired by the Paruparo Festival held in her hometown of DasmariÃ±as, managed to propel the CaviteÃ±a into the top 10 best in national costumes.Â