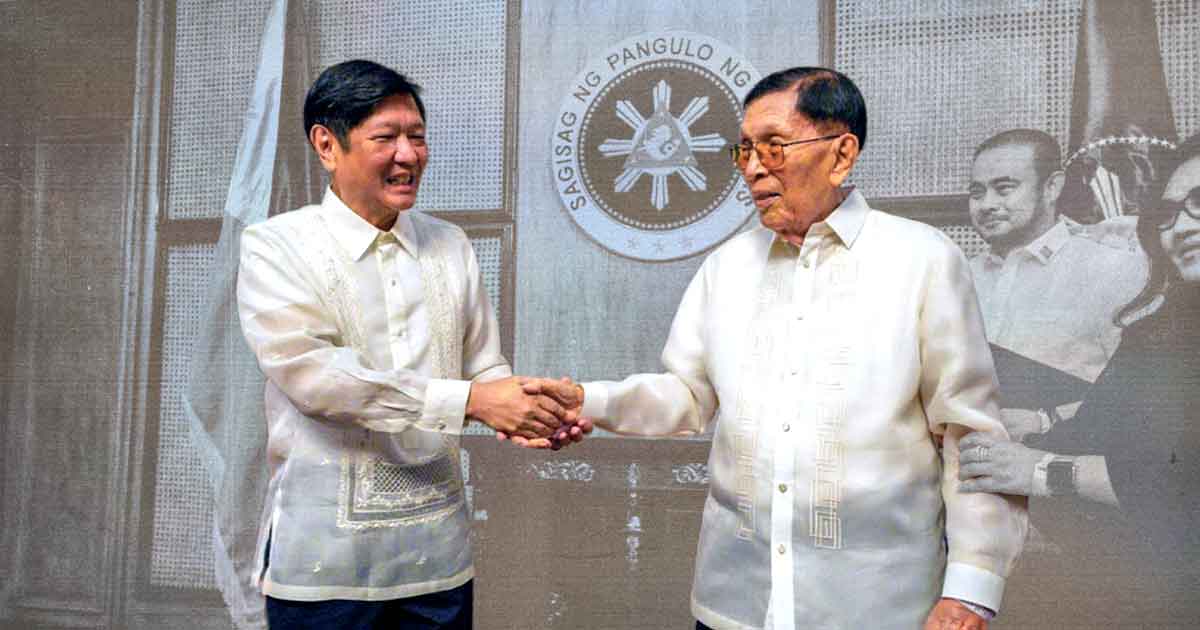 President Bongbong Marcos appointed ex-Senate President Juan Ponce Enrile as chief legal counsel. Enrile’s oath-taking finally took place on July 26. This is according to a statement from the Office of the Press Secretary.

After Enrile’s nomination on June 17, he reassured the public of his genuine service. He made special mention of his commitment to the Marcos administration.

“I will devote my time and knowledge to the republic and for BBM (Bongbong Marcos). I want him to succeed,” Enrile said.

During his 50 years in politics, Enrile fulfilled various roles. It’s no surprise that PBBM chose him to be his chief legal counsel. Enrile was an important part of dictator Ferdinand Marcos Sr.’s own administration.

He was serving in that position when Marcos Sr., declared martial law in 1972. In fact, Enrile played a vital role in the declaration. On September 22, 1972, he was “ambushed” in Wack-Wack subdivision. Marcos Sr. used the ambush to justify the declaration of Martial Law the following day.

But on February 22, 1986, Enrile and then-AFP vice chief of staff, Fidel Ramos turned on Marcos. Aside from joining the crowds at EDSA, Enrile admitted in a news conference that the 1972 ambush was fake. The Philippine Daily Inquirer and Australia’s The Age wrote about his admission.

Enrile later retracted his own claim about the “fake ambush.” In Juan Ponce Enrile: A Memoir, and in a documentary, Enrile said the ambush was real. His 2012 claims belie what he said in 1972.

Is he past his prime?

After years of Enrile being in the Senate, you would expect him to retire from public service at some point. Actually, Enrile announced his retirement in 2016. But he tried to stage a senatorial comeback in 2019, which didn’t go well for him at all.

He’s 98, so you can’t help but wonder if Enrile is still capable of serving the public. His age and health may pose a problem down the road. Bongbong Marcos has only been president for a few months.

One hopes that Enrile doesn’t expire before his term does.