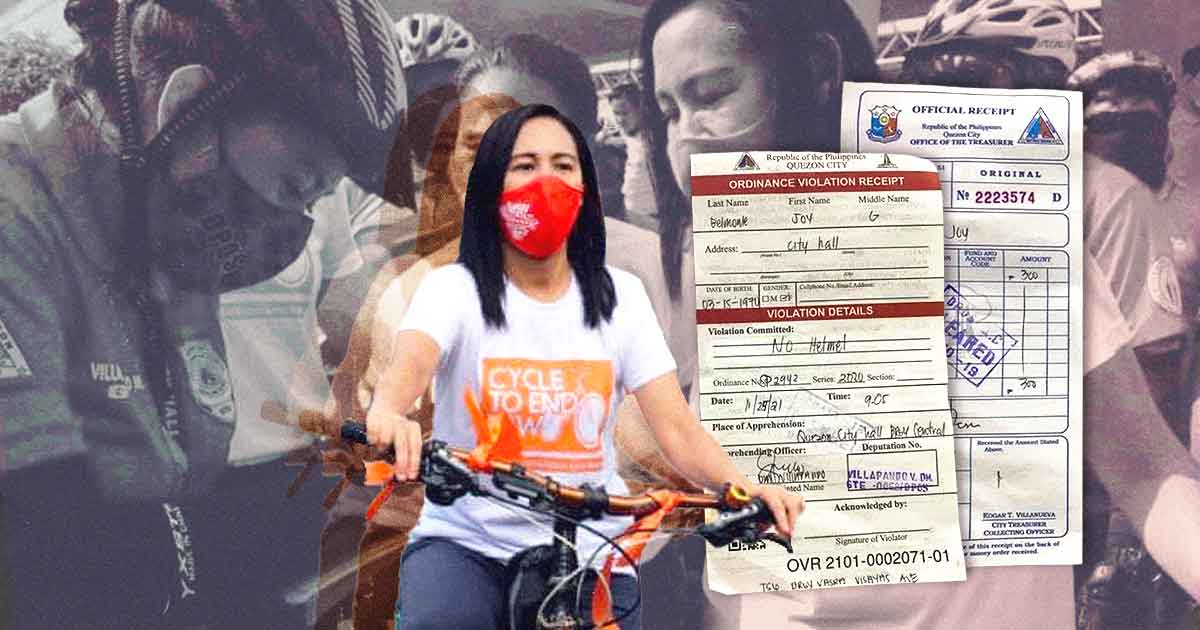 Even the Quezon City mayor wasn’t exempted from the city’s biking rules and regulations.

As cycling grows to become one of the most utilized modes of transportation in the pandemic era, safety rules and regulations must be consistently enforced to ensure everyone’s safety on the road — even if it means apprehending the very people who passed these policies.

Yep, even Quezon City Mayor Joy Belmonte is subject to the law, which is why she was given a ticket and slapped a fine when she failed to wear a helmet during the Cycle to End Violence Against Women bike event in Quezon City on Thursday.

According to the city government, Belmonte, along with another violator, received violation tickets from the city’s Department of Public Order and Safety (DPOS) and was charged a P300 penalty as a first-time offender of the City Ordinance 2942 series of 2021, or the rule that outlines the required protective gear for riding cyclists.

Belmonte’s reason was that she lent her helmet to one of the participants of the bike event who did not bring their own protective gear.

Despite being sanctioned, Belmonte still commended the DPOS for carrying out their duty and enforcing the law.

The Cycle to End VAW event was launched by the local government of Quezon City together with the embassies of the Netherland and Austria, the Philippine Commission on Women, Spark Philippines, and several non-government organizations in celebration of National Bike Day last November 18. The biking event also commemorated the local government’s 18-day campaign to end violence against women and the third anniversary of the #RespetoNaman Movement.

Through this event, we hope to spread awareness among the general public about the importance of protecting the rights of women and girls by addressing all forms of gender-based violence,” Belmonte said.