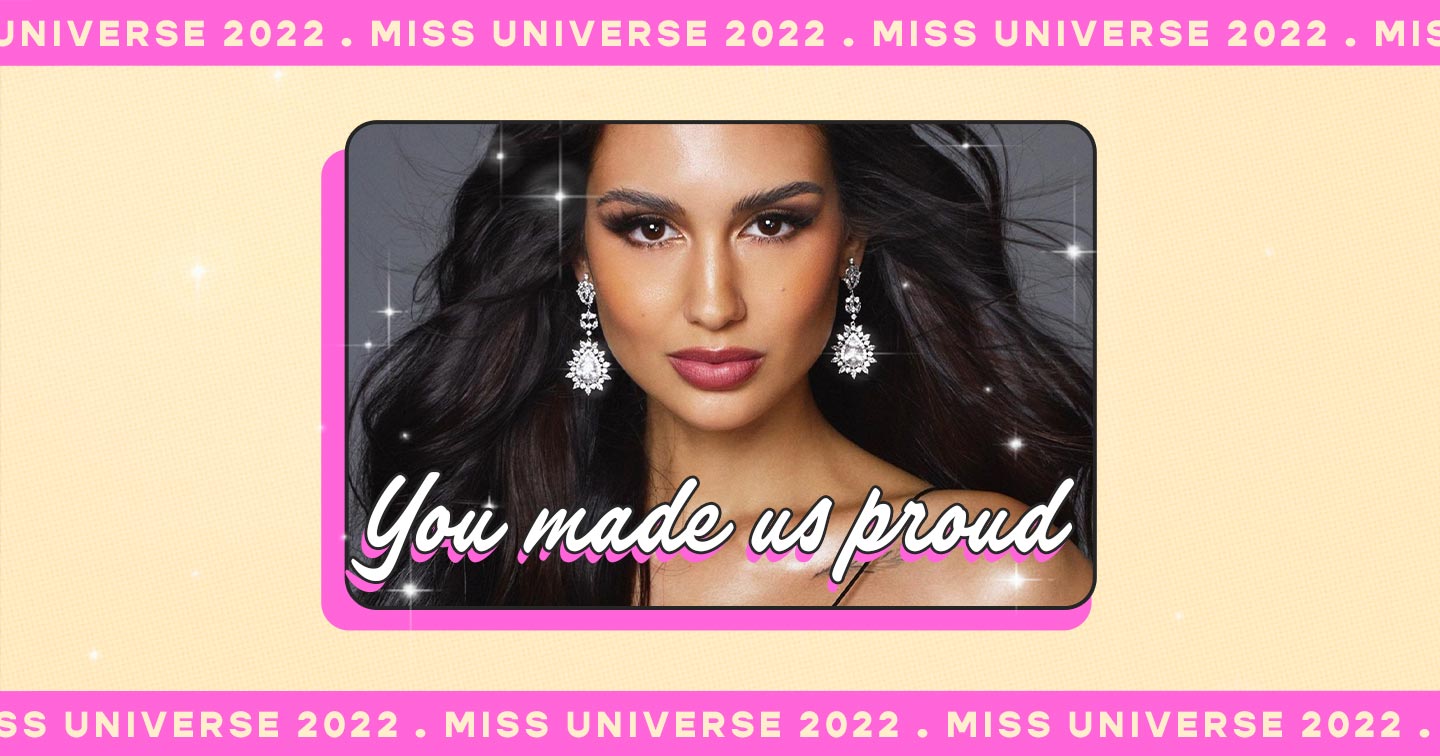 Celeste Cortesi, the Philippines’ bet for the Miss Universe 2022 pageant, failed to get a placement in the prestigious pageant as she was not able to enter the Top 16.

Celeste Cortesi’s failed bid in Miss Universe 2022 ends the Philippines’ 12-year streak for landing a placement in the pageant’s semi-finals.

We love you Celeste ? #71stMissUniverse

While Celeste Cortesi was not able to secure a placement in Miss Universe’s Top 16, a half-Filipina was able to get the crown!

Gabriel is a fashion designer who also has Filipino descent. Her father is a Filipino while her mother is an American.

Passing on the crown to Gabriel is India’s Harnaaz Sandhu. Gabriel bested 82 other candidates from different countries.

Gabriel had to go through two question-and-answer rounds, which determined her fate to winning the crown. The first is during the Top 5 round with Venezuela, Dominican Republic, Puerto Rico, and Curacao.

During the Top 5 round, Gabriel was asked: “Miss Universe recently made an inclusive change about allowing mothers and married women to compete this year. What’s another change you’d like to see and why?”

Gabriel’s answer was about seeing an age increase. Currently, she is 28 years old, the oldest age to compete for the crown.

Her full answer was: “For me, I’d like to see an age increase because I am 28 years old, and that is the oldest age to compete and I think it’s a beautiful thing. My favorite quote is, ‘If not now, then when?’ I believe age does not define us. It’s not yesterday, it’s now, the time is now, and you can go after what you want.”

For the final Q&A round, U.S.A., Venezuela, and Dominican Republic answered the same question: “If you win Miss Universe, how would you work to demonstrate this as an empowering and progressive organization?”

Gabriel related her job as a fashion designer to her answer and how her ways give a good effect to the society, such as cutting down on pollution, helping women who are victims of human trafficking and domestic violence, as well as using her talent to make a difference.

Gabriel’s full answer goes: “Well, I will use it to be a transformational leader. As a very passionate designer, I’ve been sewing for 13 years, I used fashion as a force for good. In my industry, I’m cutting down on pollution through recycled materials when I make my clothing, I teach sewing classes to women to help them survive human trafficking and domestic violence. And I say that because it’s important to invest in others, invest in our community, and use our unique talent to make a difference. We have something special, and we can plant those seeds to other people in our life. We transform them, and we use that as a vehicle for change.”

In the end, her answer prevailed among the judges that allowed her to become the new Miss Universe titleholder. Filipino businesswoman Olivia Quido-Co was part of the judges on the coronation night with Big Freedia, Emily Austin, Swena Patel, Myrka Dellanos, Mara Martin, and former Miss Universe queens Ximena Navarrete and Wendy Fitzwilliam.