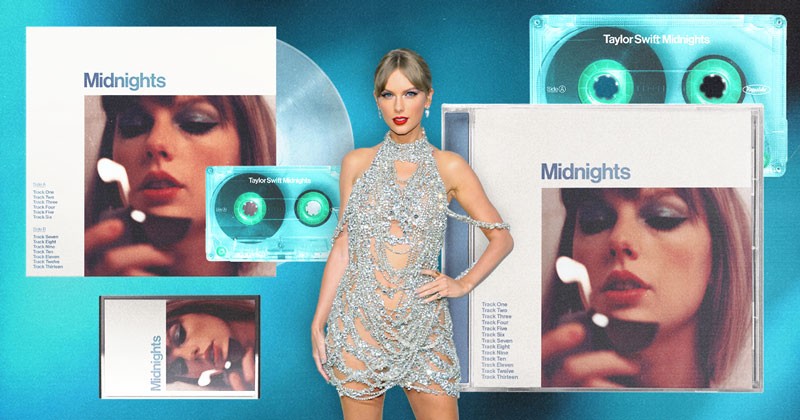 She announced TS10, which drops on October 21st, at the VMAs!

Surprise drops don’t faze Taylor Swift fans. It’s an inside joke between Swifties and the country/pop star that spans years. From capital letters in album booklets to Tumblr posts, Miss Swift has her fandom on its toes. It was no less surprising when she made a shocking announcement at this year’s MTV Video Music Awards. Her tenth album is coming, and it’s called Midnights.

Since she started re-recording her albums, fans have been waiting to see what she’d drop next. Their rampant speculation has leaned towards 1989 (Taylor’s Version) or Reputation (Taylor’s Version). Many theories have popped up on TikTok, Tumblr, and Twitter. But Taylor debunked them all in a sparkly, sparkly way.

During the MTV VMAs, while accepting the award for Video Of The Year for “All Too Well: The Short Film,” she teased the news. “I thought it might be a fun moment to tell you that my brand new album comes out Oct. 21.”

Not long after, the phrase “SCREAMING CRYING THROWING UP” trended on Twitter.

Midnights, the stories of 13 sleepless nights scattered throughout my life, will be out October 21. Meet me at midnight.

“Midnights, the stories of 13 sleepless nights scattered throughout my life, will be out October 21. Meet me at midnight,” she wrote alongside a pre-order link. It also had what looked like an album cover (the internet thinks it’s a decoy) and yet another cryptic list: instead of a track list, it just said “Side One – Track One, Track Two…” and so on. The first side has six tracks; the second has seven, which add up to Swift’s lucky number: 13.

The other clues Ms. Swift dropped? A little vignette about what the album means to her. “This is a collection of music written in the middle of the night, a journey through terrors and sweet dreams. The floors we pace and the demons we face,” she wrote.

Safe to say everyone’s excited! It’s worth noting that the release date coincides with Kim Kardashian‘s birthday. Kardashian’s feud with Swift is well-documented.

Yesterday, Swift announced three new editions of Midnights. These editions have unique features and will only be available for a limited time. Each version has a unique photo of Swift. She wears different retro-inspired outfits in each one.

The new editions are “Blood Moon,” “Jade Green,” and “Mahogany.” Swift named them after the colors they represent. The ‘Jade Green’ edition has the title and tracklisting printed in a muted gradient of deep greens. The original version has the same laid out in blue.

Meanwhile, the “Blood Moon” edition of Midnights features a gradient of deep red to orange. The “Mahogany” edition comes with brown and gold accents.