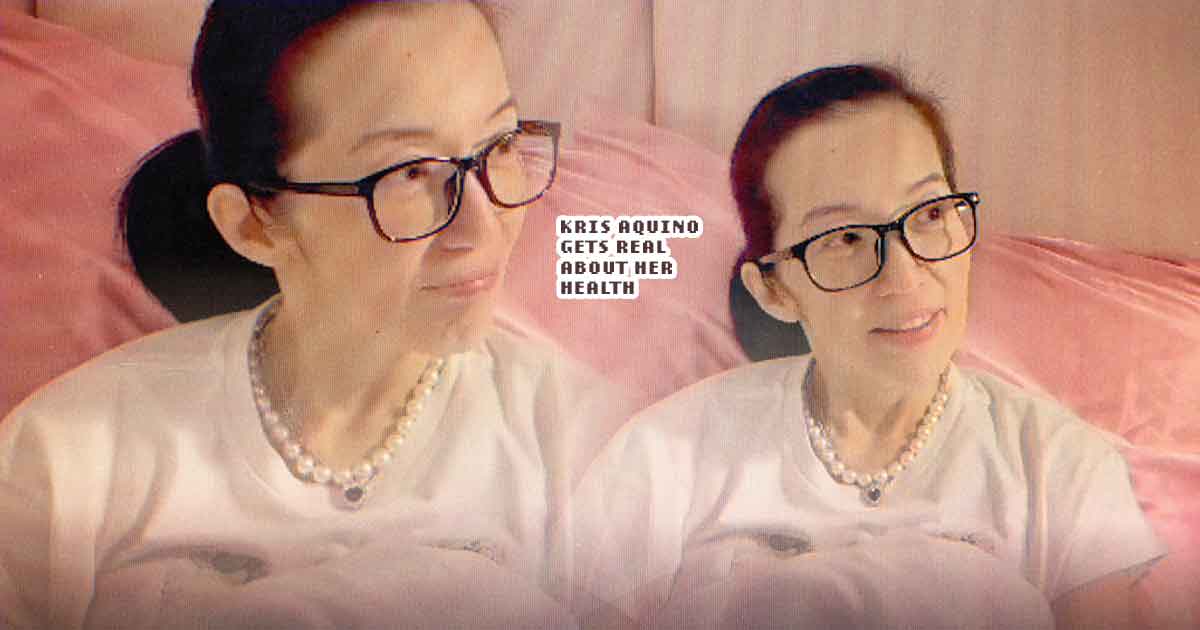 The Queen of All Media released an update on IGTV.

Kris Aquino bid her fans “goodbye for now and the next few years” as she prepares to undergo treatment in the US.

On June 3, the Queen of All Media shed some light on what she’s going through. Kris revealed her diagnosis of eosinophilic granulomatosis with polyangiitis (EGPA) on Instagram. EGPA is a disease caused by the inflammation of certain types of cells in one’s blood or tissues.

Her attending physician Dr. NiÃ±o Gavino made the diagnosis. He’s a Filipino-American based in Houston, Texas, and that’s where Kris is going.

“As a doctor, we need to treat our patients in a holistic manner. She is very much aware of the obstacles ahead of her.  We didn’t sugarcoat anything. She has always asked for straightforward, honest, and direct answers,” Gavino said.

Kris has been ill for a while.

It started with chronic spontaneous urticaria (CSU) in 2018. CSU is the medical term for hives with no known cause. All cases of CSU result in raised red bumps that are very itchy. These may change, grow, spread, disappear, and reappear on the skin.

Her condition became worse over time. She developed fibromyalgia, hypertension, and overproduction of thyroid antibodies. As if that wasn’t enough, she also had severe migraines. She saw a lot of doctors who weren’t able to help her until she met Dr. Gavino. He diagnosed her with EGPA.

A Google search reveals that EGPA is also known as Churg-Strauss syndrome. It’s characterized by inflamed blood vessels. That can restrict blood flow to organs and tissues, damaging them. In some cases, the damage is permanent.

EGPA can also cause other problems. These include gastrointestinal bleeding, nasal allergies, rashes, and sinus problems. Numbness and pain in one’s hands and feet are also common.

Adult-onset asthma is the most common sign of EGPA. It’s rare and has no cure. But some manage symptoms with steroids and other powerful immunosuppressants.

Kris took steroids for her “fast-progressing EGPA.” Unfortunately, she had a severe adverse reaction to them. Her doctors couldn’t ease her symptoms because of her allergies to various medicines. That’s why they suggested she go to the US. There, Kris will try a drug called Nucala (Mepolizumab). It’s a non-steroid, FDA-approved treatment for EGPA that’s not available anywhere else.

Dr. Gavino is also planning on ruling out other autoimmune diseases like lupus. They will run comprehensive blood tests to check Kris’s autoimmune markers. In the meantime, Dr. Gavino will treat her with Rituxan to address other symptoms related to lupus. If it fails after six months, they will consider another course of treatment.

“The next nine to twelve months will be crucial for us to see if she can achieve remission. To survive, Ms. Aquino has to find the right combination and make it her maintenance medicine,” he says.

Kris’ condition is very rare. Only one in one million people receive a diagnosis of EGPA every year. The life expectancy for it without medical intervention is 25%. A five-year survival rate is 62%.

The actress and mother hopes that she gets more than the two years her doctor has given her.

In the meantime, all that we can offer are prayers.